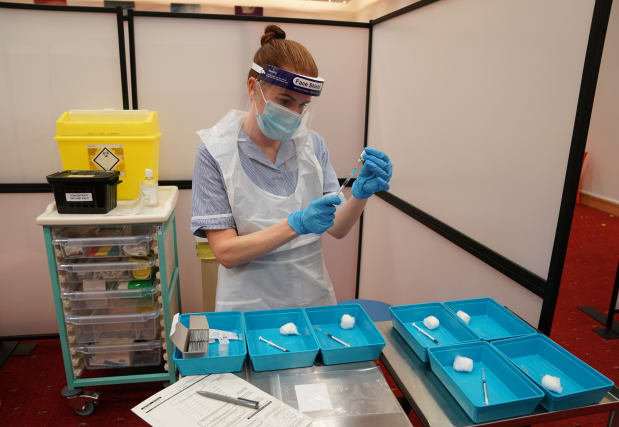 Vaccinations against coronavirus are to be ramped up as mass injection centres open but pleas have been made to the public to stick to the lockdown rules to prevent avoidable deaths.

All four nations of the UK are facing dire warnings, with high levels of infection and hospitals struggling under the strain.

Health Secretary Matt Hancock has warned that when it comes to the current measures “every flexibility can be fatal”.

His words followed those of England’s Chief Medical Officer Chris Whitty who said the only way to prevent avoidable deaths is to stay at home wherever possible as the NHS faces the “most dangerous situation” in living memory.

Coronavirus cases in Wales are “cause for serious concern”, a public health director said on Sunday, while Scotland’s Deputy First Minister John Swinney said their nation is facing “a very alarming situation” with the virus.

Northern Ireland’s health chiefs said the number of Covid-19 patients will double by the third week of January, with one trust boss telling how “our hospitals are facing into an abyss”.

The warnings come as Mr Hancock is due to set out the Government’s vaccines delivery plan – hailing it as the “keystone of our exit out of the pandemic”.

A vaccine rollout strategy is also due to be laid out in Wales, setting out “a series of milestones” for when people will be offered a jab, according to the Welsh Government.

Around two million people across the UK have now received their first dose of a vaccine, with an exact figure to be given later on Monday.

The Government is aiming to vaccinate almost 14 million vulnerable people by the middle of February.

Mr Hancock has said they are on course to meet the target, with over 200,000 people being vaccinated every day in England, a third of over-80s there already jabbed, and all adults expected to be offered an injection by the autumn.

Thousands more people are expected to be given a vaccine soon, with the opening of seven mass vaccination sites across England on Monday.

The new centres – including at a football stadium and a tennis club – will be joined later this week by hundreds more GP-led and hospital services along with the first pharmacy-led pilot sites, taking the total to around 1,200, NHS England said.

The locations – Ashton Gate in Bristol, Epsom racecourse in Surrey, the Excel Centre where London’s Nightingale hospital is based, Newcastle’s Centre for Life, the Manchester Tennis and Football Centre, Robertson House in Stevenage and Birmingham’s Millennium Point – will offer jabs to people aged 80 and above, along with health and care staff.

Mr Hancock, who is due to visit one of the sites, will set out the vaccines delivery plan at a Downing Street press conference on Monday afternoon.

The Health Secretary said the NHS has made “fantastic strides” with the rollout.

He added: “From today, the full scale of our plans will be published, so the public can be assured of the time, effort and resources that have gone and will go into ensuring we protect the British people from the scourge of this virus.”

Nadhim Zahawi, the minister in charge of vaccine deployment, said the plan will “set out our ambitions for the coming weeks and months as we continue to expand our programme at breakneck speed, with strategies to underpin every commitment”.

In Scotland, the Oxford/AstraZeneca jab is available in more than 1,000 locations from Monday.

The number of patients with Covid-19 in hospital has reached a record high in England, while the official Government coronavirus death toll for the UK passed 81,000 at the weekend and lab-confirmed cases hit more than three million.

Separate figures published by the UK’s statistics agencies for deaths where Covid-19 has been mentioned on the death certificate, together with additional data on deaths that have occurred in recent days, show there have now been 97,000 deaths involving Covid-19 in the UK.

Professor Peter Horby, chairman of the New and Emerging Respiratory Virus Threats Advisory Group (Nervtag), described the current situation as being “in the eye of a storm” adding that if there is any sign the measures in place are not working then “we’re going to have to be even stricter”.

Coronavirus testing is also due to ramp up across England this week, with asymptomatic people who cannot work from home set to be prioritised for quick turnaround tests made available to every local authority as part of the community testing programme.