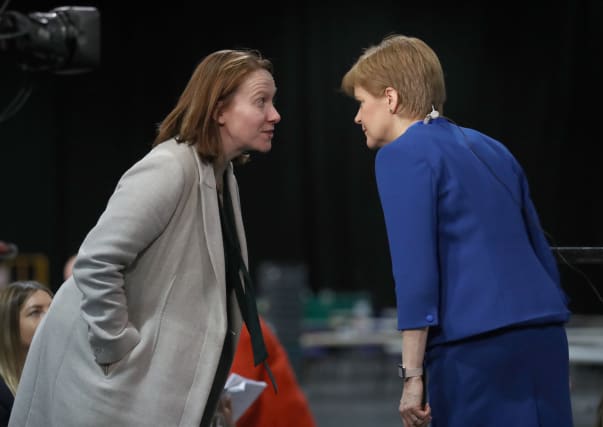 Alex Salmond has accused Nicola Sturgeon’s top aide of leaking the name of a woman who made a sexual harassment complaint against him but the Scottish Government has said his claim is “untrue”.

Mr Salmond makes the accusation in evidence submitted to the inquiry established to investigate the botched handling of complaints made against him, the full text of which was published by the Spectator magazine on Saturday.

In the evidence, the former first minister says Liz Lloyd, Ms Sturgeon’s chief of staff, divulged the name of one of the women who made a complaint against Mr Salmond, during a meeting with his former chief of staff, Geoff Aberdein.

A Scottish Government spokesman said it has “protected the identities of the complainants throughout”.

In his evidence, Mr Salmond wrote: “I was contacted by phone on or around 9 March 2018 and further the following week by Geoff Aberdein, my former chief of staff.

“The purpose of the contact was to tell me about meetings he had held with the First Minister’s chief of staff, Liz Lloyd, at her request.

“In the second of these meetings she had informed him that she was aware of two complaints concerning me under a new complaints process introduced to include former ministers.

“She named one of the complainers to him. At that stage I did not know the identity of the other complainer.”

Scottish Tory leader Douglas Ross has called for Ms Lloyd to be sacked if the claims are found to be true.

He said: “It is already a fact that the women at the heart of this process have been utterly failed by basic errors from the SNP Government.

“Their botched investigation let those women down. The news that the First Minister’s chief of staff possibly leaked one of their names to Mr Salmond’s team will be a further crushing blow.

“This claim, that a potential victim’s identity was apparently revealed, suggests an appalling act that entirely betrays those women’s right to confidentiality and makes a mockery of the privacy of the Government’s investigation.”

He added: “The First Minister must now provide evidence to refute these claims or if they are true, sack Liz Lloyd for gross misconduct.”

“The First Minister has set out her contacts with Mr Salmond in detail to Parliament. She stands by her statements and the detailed written evidence she has provided, including in relation to the meeting on 29 March 2018.”