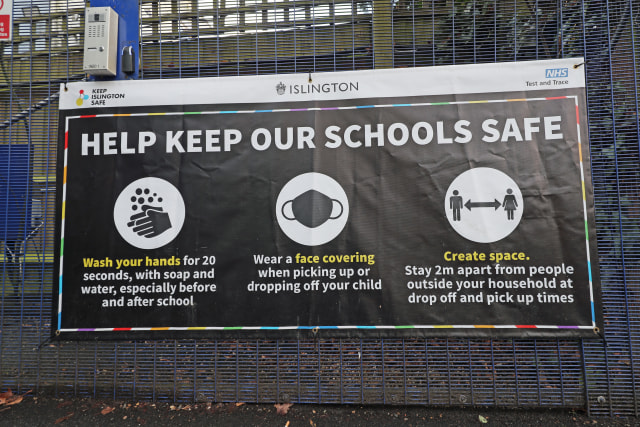 Too many children are returning to school despite the national lockdown, a union has warned, as scientists say tougher restrictions are needed.

The NASUWT teachers’ union said some schools had reported that the majority of parents were demanding places for their children during lockdown.

Primary and secondary schools in England have moved to remote learning for most pupils, but remain open for the children of key workers and those deemed vulnerable.

He said in a statement: “Reducing the spread of the virus in the community is critical if we are to ensure that all schools can remain open safely.

“However, the failure to ensure strict adherence to the national lockdown measures means that some schools are already reporting that the majority of parents are demanding places for their children during the current restrictions.

“That means we have many more children and adults mixing in schools than would be expected under this national lockdown and the risk of the virus being transmitted to others on their journeys to and from schools and during the school day remains high.”

Dr Roach said “contradictory messages” from the Government had resulted in the majority of children and staff returning to some schools.

He added that it was important for parents to have access to financial support so they can keep their children at home.

“It is essential that ministers do whatever it takes to ensure that parents can afford to keep their children at home and that children who need to do so are able to access their education safely from home,” Dr Roach said.

His comments come as Professor Robert West, a participant in the Scientific Pandemic Influenza Group on Behaviours, said the current restrictions are “still allowing a lot of activity which is spreading the virus”.

The professor of health psychology at University College London said he, and people he has spoken to including epidemiologists, medical scientists and virologists, think the rules should be tightened.

He told BBC News more children are going to school than in the first lockdown and that schools are “a very important seed of community infection”.

He added: “Because we have the more infectious variant, which is somewhere around 50% more infectious than last time round in March, that means that if we were to achieve the same result as we got in March we would have to have a stricter lockdown, and it’s not stricter.