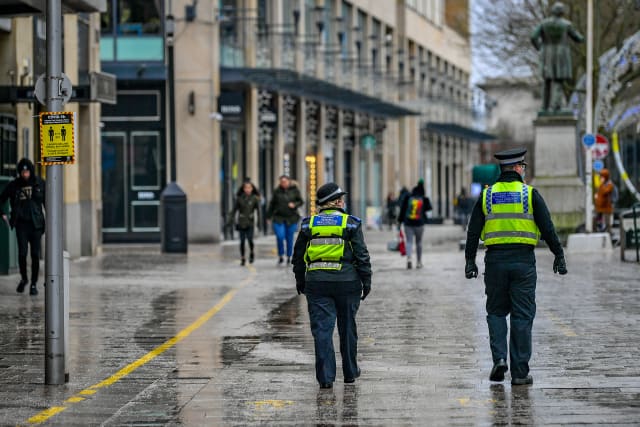 The Home Secretary has defended the way police have handed out fines for lockdown breaches, warning that officers “will not hesitate” to take action.

Priti Patel said the increasing number of new Covid-19 cases proved there was a need for “strong enforcement” in cases where people were clearly breaking the rules.

It comes after recently published guidance from the National Police Chiefs’ Council (NPCC) said officers no longer need to give repeated warnings before issuing fines.

Police tactics have come in for scrutiny after Derbyshire Police handed out £200 fines to two women who drove separately to go for a walk at a remote beauty spot situated around five miles from their homes.

A Home Office source told The Telegraph there would be a more “rapid movement to enforcement” around the issuing of £200 fines for those not following the rules.

Ms Patel said: “Our police officers are working tirelessly to keep us safe. Not only are they continuing to take criminals off our streets, but they are also playing a crucial role in controlling the spread of the virus.

“The vast majority of the public have supported this huge national effort and followed the rules.

“But the tragic number of new cases and deaths this week shows there is still a need for strong enforcement where people are clearly breaking these rules to ensure we safeguard our country’s recovery from this deadly virus.

“Enforcing these rules saves lives. It is as simple as that. Officers will continue to engage with the public across the country and will not hesitate to take action when necessary.”

The NPCC guidance, published on January 6, states officers should still offer people “encouragement” to comply with the regulations and explain any changes.

“However if the individual or group does not respond appropriately, then enforcement can follow without repeated attempts to encourage people to comply with the law,” the NPCC said.

“We police by consent. The initial police response should be to encourage voluntary compliance.”

The NPCC said the four-step principles of “engage, explain, encourage and only enforce as a last resort” will continue to apply.

Derbyshire Police has confirmed it would be reviewing all fixed penalty notices issued during the new national lockdown in England after it received clarification about the coronavirus regulations from the NPCC following the incident with the two women.

Jessica Allen, who received the fine with friend Eliza Moore, later told BBC News: “We are happy to hear that Derbyshire Police have been told to not be so heavy-handed with fines and return to the four Es (Engage, Explain, Encourage, Enforce) they were originally doing.

“We are yet to hear anything regarding our fine but if we have managed to save somebody the worry of going for a walk and fearing they would be fined then we have done what we set out to do.”

Ex-Durham Police chief constable Mike Barton told BBC Breakfast there had been “damage done” to public trust by Derbyshire Constabulary’s actions and that “for the public to comply with the law, they have got to think and see the police are acting fairly”.

Police forces across the country have revealed they have been more active in dealing with breaches.

North Wales Police said its rural crime officers had dealt with people breaching coronavirus rules at Moel Famau in Flintshire, including those who had come from England and other parts of Wales.

Norfolk Police said it had fined a man and a woman who drove more than 120 miles from their home in Wellingborough in Northamptonshire to Horsey in Norfolk to look at a seal colony.