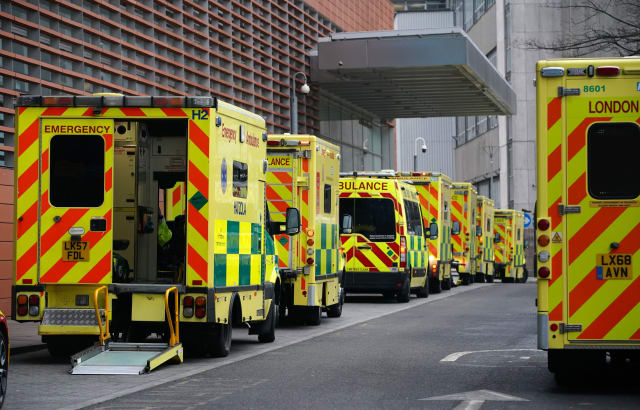 The UK has recorded its highest number of Covid-19 deaths reported on a single day since the pandemic began, while figures for cases and hospital admissions have also hit record levels.

The Government said a further 1,325 people had died within 28 days of testing positive for Covid-19 as of Friday – bringing the UK total to 79,833.

Meanwhile, there were a further 68,053 lab-confirmed cases of coronavirus in the UK, the highest figure reported in a single day since the start of mass testing last May, although it may have been higher in April 2020, with cases estimated to have been as high as 100,000 per day at the peak of the first wave.

The number of Covid-19 patients in hospital in England also stood at a record 29,346 as of 8am on Friday, up by 30% from a week ago, while admissions also hit a new high with a total of 3,967 admissions in England reported for January 6, passing the previous record of 3,697 on January 5, according to NHS England figures.

In a more positive development, a third Covid-19 vaccine, from US biotech firm Moderna, was given the green light by the Medicines and Healthcare products Regulatory Agency (MHRA) – joining the vaccines from Pfizer/BioNTech and Oxford/AstraZeneca.

But the Government has doubled down on its “stay at home message” by launching a new advert, fronted by England’s chief medical officer Professor Chris Whitty, urging everyone in England to “act like you’ve got” coronavirus.

Prof Whitty said: “Vaccines give clear hope for the future, but for now we must all stay home, protect the NHS and save lives.”

Prime Minister Boris Johnson added: “I know the last year has taken its toll – but your compliance is now more vital than ever.”

Government death figures continue to be affected by a lag in the publication of recent data and will contain some deaths that took place over the Christmas and New Year period that have only just been reported.

Separate figures published by the UK’s statistics agencies for deaths where Covid-19 has been mentioned on the death certificate, together with additional data on deaths that have occurred in recent days, show there have now been 95,000 deaths involving Covid-19 in the UK.

Scientists advising the Government believe the current lockdown may lead to a plateau of cases of coronavirus across the UK rather than the dramatic cut seen following the March and April lockdown.

They estimate there are currently more than 100,000 new infections per day and possibly higher than 150,000 which they believe puts the current number of daily cases at a higher level than during the first wave of the pandemic.

With the current lockdown and vaccine rollout, deaths from coronavirus are expected to start dropping in February, while hospital admissions should fall after that.

Coronavirus cases are expected to drop in the spring due to vaccination plus the fact people spend more time outdoors, making it harder for the virus to spread.

Elsewhere, hospitals also reported increasing pressures, with more than half of all major hospital trusts in England currently having more Covid-19 patients than at the peak of the first wave.

In London, mayor Sadiq Khan declared a “major incident” as the spread of coronavirus threatens to “overwhelm” the capital’s hospitals.

City Hall said Covid-19 cases in London had exceeded 1,000 per 100,000, while there are 35% more people in hospital with the virus than in the peak of the pandemic in April.

NHS England figures published later on Friday showed the number of Covid patients in London hospitals stands at 7,277, up 32% on the previous week.

A “major incident” means the “severity of the consequences” associated with it are “likely to constrain or complicate the ability of responders to resource and manage the incident”.

The approval of the Moderna jab means the UK should have three vaccines to use when it comes on stream in spring.

Elsewhere, new research published on Friday suggests the Covid-19 vaccine from Pfizer and BioNTech appears to protect against a mutation in two coronavirus variants that are causing spread across the UK.

The pharmaceutical giant and researchers from the University of Texas Medical Branch carried out lab tests on the strains, one of which was found in the UK while the other originated in South Africa.

– The reproductive rate – the R rate – of the virus is thought to be between one and 1.4. The R refers to the number of people an infected person will pass the virus onto.

– Police in England and Wales have handed out more than 30,000 fines under coronavirus laws since the start of the pandemic.

– Most school pupils in Wales will be taught online until January 29, with this continuing until the February half-term unless there is a “significant reduction” in Covid-19 cases, First Minister Mark Drakeford has said.

– Around eight in 10 recent positive cases of Covid-19 in London and eastern England could be the new variant discovered in the UK, according to new ONS figures.

– Some 44% of adults in England, Scotland and Wales said they formed a Christmas day bubble, ONS data shows.

– Papers released by the Government from the Scientific Pandemic Influenza Group on Behaviours (SPI-B), which advises ministers, warned that people who are vaccinated against coronavirus may not continue to adhere to lockdown rules.