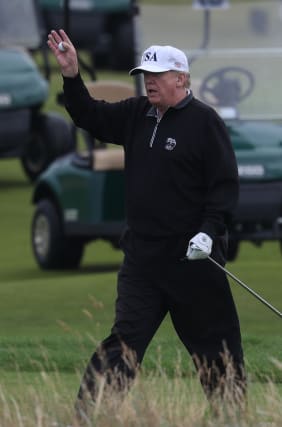 Donald Trump has revealed he will not attend Joe Biden’s inauguration as president despite having also been warned not to travel to Scotland by First Minister Nicola Sturgeon.

The US President, who was overwhelmingly defeated in November’s election, tweeted on Friday to confirm he would break with tradition and not attend the January 20 ceremony for his successor.

As part of the tradition, the outgoing president and president-elect would travel together to the ceremony at the Capitol from the White House.

However the 74-year-old is reportedly considering travelling to his Turnberry golf resort in South Ayrshire as part of his efforts to avoid seeing Mr Biden being sworn into office.

Prestwick Airport has been told to expect the arrival of a US military Boeing 757 aircraft previously used by Mr Trump on January 19, according to the Sunday Post.

Ms Sturgeon has stressed it is illegal to travel in or out of Scotland without a valid reason and said: “Coming to play golf is not what I would consider to be an essential purpose.”

When asked about the speculation earlier this week, she said: “I have no idea what Donald Trump’s travel plans are, you’ll be glad to know.

“I hope and expect that – as everybody expects, not everybody necessarily will hope – that the travel plan immediately that he has is to exit the White House.

“But beyond that I don’t know.

“We are not allowing people to come in to Scotland without an essential purpose right now and that would apply to him, just as it applies to anybody else.

“Coming to play golf is not what I would consider to be an essential purpose.”

Mr Biden won the presidency with 306 electoral college votes to Mr Trump’s 232 and will become president at noon local time on January 20 regardless of Mr Trump’s plans.

In a video statement after the recent disorder at the Capitol, Mr Trump told supporters that, while he knows they are “disappointed”, he wanted them to know “our incredible journey is only just beginning”.

Five people died in the incident including a police officer who had been struck by a fire extinguisher.