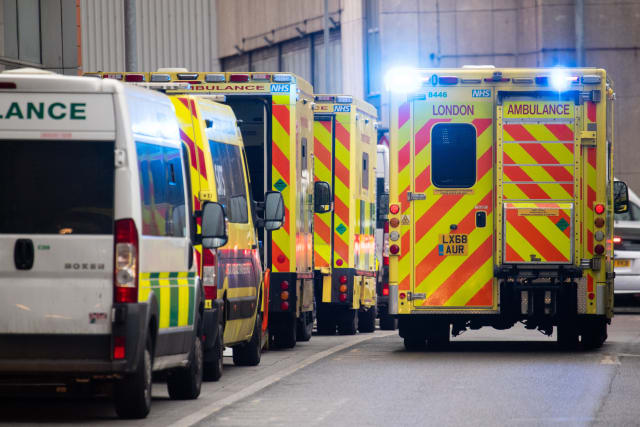 More than half of all major hospital trusts in England currently have more Covid-19 patients than at the peak of the first wave of the virus, new analysis shows.

In two regions – eastern England and south-east England – more than three-quarters of trusts are above their first-wave peak.

Other trusts have seen their numbers rise so rapidly that they could pass their first-wave peak within days.

The analysis by the PA news agency found that of 139 acute hospital trusts who reported figures for January 5, 84 – or 60% – had more Covid-19 patients than at the peak of the first wave in spring 2020.

– Barts in London, where there were 830 Covid-19 patients on January 5 compared with a first-wave peak of 606.

– Portsmouth Hospitals University, which had 457 patients compared with a first-wave peak of 244.

– University Hospitals of Derby and Burton, which had 426 patients versus a first-wave peak of 252.

– Hull University Teaching Hospitals, where the number stood at 208 on January 5 compared with a first-wave peak of 112.

A majority of acute trusts in London – 14 out of 23 – are currently recording patient levels higher than at the peak of the first wave.

In northern England most trusts are still below their first-wave peak, however.

Some trusts in northern areas saw numbers hit a record high in the autumn then fall back before Christmas, only to start rising again more recently.

An example is Liverpool University Hospitals Trust, which saw a peak of 475 patients on October 30, followed by a drop to 112 by December 13, but where the number now stands at 248.

Acute trusts manage all the major hospitals in England with A&E departments, inpatient and outpatient surgery, and specialist medical care.

The total number of Covid-19 patients in all hospitals in England – including mental health and community trusts – currently stands at 28,246. This is 49% above the first wave peak of 18,974 on April 12.

All figures are based on the latest available data from NHS England.