Questions for Sturgeon after Salmond ‘claims she breached ministerial code’ 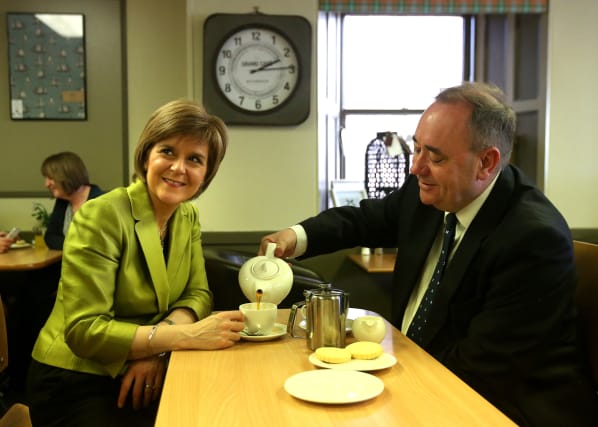 Nicola Sturgeon is facing further questions over statements made about Alex Salmond after her former colleague reportedly claimed she breached the ministerial code by misleading the Scottish Parliament.

The former first minister's submissions to an inquiry into sexual assault claims made against him have been obtained by national newspapers, in which he claims Ms Sturgeon's evidence over when she knew about the allegations was "simply untrue".

Ms Sturgeon, who took over as First Minister and SNP leader in late 2014, initially told Holyrood she first heard of complaints of sexual misconduct against her predecessor at a meeting with him in her home on April 2, 2018.

But in Mr Salmond's subsequent criminal trial, it was revealed Ms Sturgeon had been made aware of the allegations in an informal meeting with his former chief of staff Geoff Aberdein on March 29 that year – four days earlier – with Ms Sturgeon later telling the inquiry she "forgot" about the encounter.

In his inquiry submission obtained by the papers, Mr Salmond said the March meeting had been arranged after Mr Aberdein was told of two allegations made under a new complaints procedure set up in light of the MeToo movement.

According to The Herald, Mr Salmond said: "This (preliminary) meeting was for the purpose of discussing the complaints and thereafter arranging a direct meeting between myself and the First Minister.

"Most seriously, Parliament has been repeatedly misled on a number of occasions about the nature of the meeting of 2nd April 2018.

"The First Minister told Parliament (see Official Report of 8th, 10th & 17th January 2019) that she first learned of the complaints against me when I visited her home on 2nd April 2018.

"That is untrue and is a breach of the ministerial code."

Mr Salmond, who was cleared of 13 charges at the High Court in Edinburgh last March, also confirmed to The Times he had submitted the evidence to James Hamilton – the independent adviser on the ministerial code who is conducting a separate investigation into Ms Sturgeon.

A spokeswoman for the Scottish Government said: "The First Minister and the Permanent Secretary stand by what has been said to Parliament and in written evidence to the committee.

"The Permanent Secretary has also already provided detailed answers in person to the committee and will provide further oral evidence on Tuesday.

"The First Minister looks forward to answering questions when she appears later this month.

"In relation to the ministerial code referral, Mr Hamilton has the freedom to investigate as he feels is appropriate and we will not prejudge that process."

"We should always remember that the roots of this issue lie in complaints made by women about Alex Salmond's behaviour whilst he was first minister, aspects of which he has conceded.

"It is not surprising therefore that he continues to try to divert focus from that by seeking to malign the reputation of the First Minister and by spinning false conspiracy theories.

"The First Minister is concentrating on fighting the pandemic, stands by what she has said, and will address these matters in full when she appears at committee in the coming weeks."

What has been revealed are allegations of shocking, deliberate and corrupt actions at the heart of government. There is now clear evidence of Nicola Sturgeon abusing her power to deceive the Scottish public.

If this proves to be correct, it is a resignation matter. https://t.co/00mDmbLDTA

However Scottish Conservative leader Douglas Ross suggested it could be a "resignation matter" for Ms Sturgeon.

He said: "Alex Salmond, the very person who knows exactly what Nicola Sturgeon did behind the scenes and precisely what happened in their meetings, has now said she 'misled' the Scottish Parliament and 'broke' the ministerial code.

"There are witnesses and there appears to be a mountain of evidence that confirms Nicola Sturgeon knew of the allegations before she claimed to find out.

"This evidence looks to show that she lied about the secret meeting with Salmond's former chief of staff, and ever since she has been trying to cover it up by inventing an increasingly implausible story.

"There is now clear evidence of Nicola Sturgeon abusing her power to deceive the Scottish public.

"If this proves to be correct, it is a resignation matter. No First Minister, at any time, can be allowed to get away with repeatedly and blatantly lying to the Scottish Parliament and breaking the ministerial code."

Scottish Labour deputy leader Jackie Baillie, who sits on the Committee on the Scottish Government Handling of Harassment Complaints, added: "Alex Salmond's explosive allegations demand answers from the First Minister to the committee.

"The bombshell accusation that Nicola Sturgeon has broken the ministerial code has the potential to end her political career and demands a robust and honest answer from the First Minister.

"This committee demands truthfulness and honesty from every witness it calls – it is vital that the First Minister tells the truth, the whole truth and nothing but the truth when she appears before the committee."