Police warn protesters ahead of planned demonstration in capital 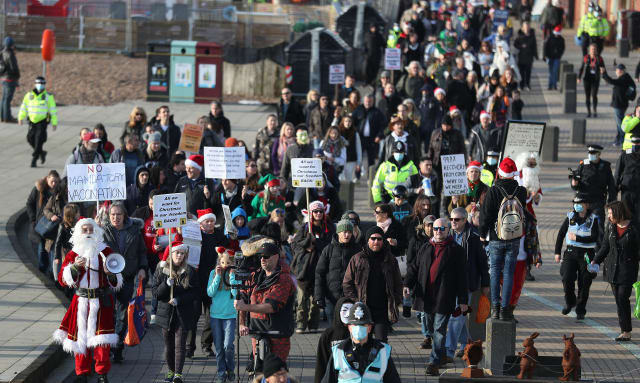 The Metropolitan Police has warned officers will take action against any protesters ahead of planned anti-lockdown demonstrations in London over the weekend.

The protests were planned after England entered a period of strengthened coronavirus restrictions, including a “stay at home” message from the Government.

The group was also involved in a protest in Parliament Square earlier this week in which 21 people were arrested, and its social media accounts called for “thousands” to join the march.

However, an open letter from the Met Police said the force was “aware” of groups looking to gather to protest, and strongly advised people not to attend any public meetings.

It read: “The MPS strongly advises people not to attend any gathering, for the protection of yourselves and others.

“We are still in the middle of a global pandemic.”

“It is your responsibility to check the current position and ensure you are not committing an offence by being involved in a gathering.

“We urge anyone arranging a gathering to inform your local police.”

It comes after the Met warned Londoners breaching Covid legislation “are increasingly likely to face fines”.

The force said the public should expect officers to be more “inquisitive” about why they are “out and about” during England’s third national lockdown.

People not wearing masks when they should be “and without good reason” can also expected to be “fined – not reasoned with”.

Footage on social media showed a large police presence and a number of demonstrators being removed from the scene during the protests on Wednesday in Parliament Square.