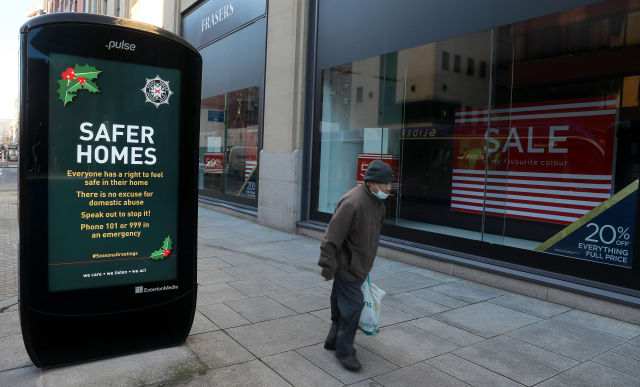 Northern Ireland’s First Minister has defended her party’s support of a post-primary transfer test going ahead, saying it will protect parental choice.

The Stormont parties are divided on the issue of academic selection, and Arlene Foster has accused rivals of the DUP of using Covid-19 to stop tests.

Mrs Foster also defended her refusal to allow a vote on a proposal by Communities Minister Deirdre Hargey (Sinn Fein) on the transfer test during Friday’s Executive meeting.

She said the vote could not go ahead because the proposal was made during the “any other business” section of the meeting.

“If you allowed that to happen, then any majority of ministers could come along and raise any sort of issue without having looked at the policy implications or the procedures and all of the things that need to be considered before an Executive decision is taken,” she said.

Several schools have already cancelled the test in a bid to alleviate children’s anxiety over “constantly shifting” arrangements resulting from the Covid-19 crisis and spiralling infection rates.

State-run GCSE, AS and A-level exams have been cancelled but the assessment for youngsters aged 10 or 11 transiting from primary school is operated by private organisations.

Northern Ireland has stiffened coronavirus restrictions and police are enforcing “stay at home” orders except for work, food shopping and exercise in a bid to drive down soaring numbers of cases.

Schoolchildren’s teaching has been badly disrupted since the pandemic began in March.

During the Executive meeting, Ms Hargey said: “This is leading to untold disruption for families and particularly for the young people involved.

“We are in the middle of a health crisis. We’re seeing a huge pressure on inpatients, on beds being made available.

“So I am calling on AQE (test organising body), and calling on all of those that haven’t taken the decision yet, to show that leadership, to show compassion in the year that we’re in.”

However, Ms Foster responded saying the issue is about parental choice, not academic selection.

“We heard from the health minister that there isn’t a health reason why this shouldn’t go ahead at this present moment in time,” she said.

“It is a legal right for people to choose to go to a selective school, and the way to do that is through academic selection, therefore they will make the decision based on what comes forward on the public health agenda, probably at the beginning of February.”

Mrs Foster also urged the public to abide by the “stay at home” message.

“These restrictions last to February 6 and then we will be looking to see whether we can lift those restrictions – and I very much hope that we can – but that’s down to everyone doing their bit and making sure that they abide by the restrictions which are currently in force,” she said.

The latest figures from the department of health on Friday notified that a further 20 people who had tested positive for Covid-19 had died.

Another 1,500 tested positive, the Department of Health said.

The health service is under severe pressure, with hospitals at full capacity and cancer surgery among operations cancelled in Belfast.

At noon on Friday, 125 patients were in emergency departments awaiting admission to a hospital bed, the NHS said.

A total of 314 were waiting in emergency departments.

Streets in the centre of Belfast were deserted on Friday amid the lockdown.

Those found to have breached the rules can be issued with a £200 fixed-penalty notice or a fine of up to £5,000 if the case goes to court.

Indoor and outdoor gatherings have been reduced from 15 people to six and from only two households.

Tighter rules around movement will remain in place until February 6 but will be reviewed later this month.

Stormont ministers have ordered most mainstream schools to remain closed to most pupils after Christmas.

Gatherings for religious worship have been halted.