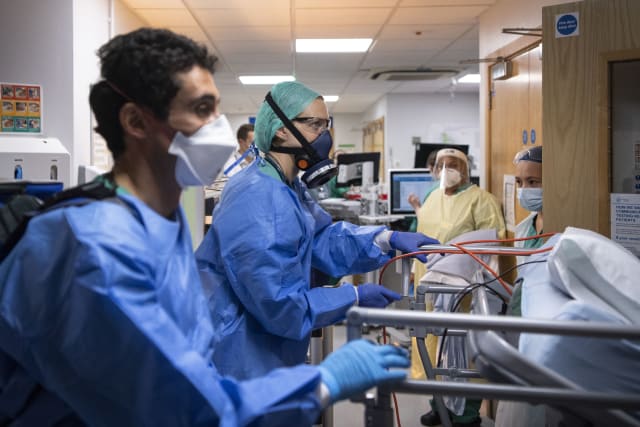 Family doctors are experiencing problems getting supplies of coronavirus vaccines for their patients, the Royal College of General Practitioners (RCGP) has warned.

The “teething problems” risked causing disappointment for vulnerable people who are at the front of the queue to receive the jabs, RCGP chair Professor Martin Marshall said.

The comments came as Health Secretary Matt Hancock launched the mass rollout of the Oxford/AstraZeneca Covid-19 vaccine to GP surgeries – but heard first-hand about the issues they face.

The surgery Mr Hancock visited to launch the programme had not received an expected delivery of the Oxford vaccine, which is easier to distribute than the Pfizer/BioNTech jab which has to be kept frozen.

The need for the rapid rollout of the vaccine was underlined as hospitals across the UK faced rising numbers of seriously-ill patients.

The jabs are being delivered to sites across the country as the Government attempts to offer a vaccine to more than 13 million people in the top four priority groups by mid-February – so far 1.3 million have received a jab.

Prof Marshall said GPs have already vaccinated hundreds of thousands of patients in the community using the Pfizer product and the Oxford vaccine should allow a greater number of people to be treated in a shorter space of time.

But he added: “Preparing for a vaccination clinic is no easy feat, it involves meticulous planning. Having to change these plans with little notice is frustrating and demoralising for GP teams – not to mention confusing and disappointing for patients.

“A vaccination programme being delivered at this pace and scale is bound to face teething problems.

“It’s vital that GPs and their teams on the ground, running vaccination clinics, are communicated with clearly and listened to – and that any concerns they have about the rollout taken seriously, so that they can be addressed.”

That message was underlined to Mr Hancock on a visit to the Bloomsbury Surgery in London, where an expected delivery of the Oxford vaccine was delayed.

Dr Ammara Hughes said Mr Hancock was “quite surprised actually to learn that we don’t know when all of our deliveries are coming, they’re very ad hoc”.

Appearing before MPs later, Mr Hancock said there were no delays in the supply of the vaccine, it was simply that producing it took time.

“The capacity constraint is the supply of the approved vaccine,” he said, rather than the ability to administer it to patients.

“That does not mean there has been a delay and it is not a criticism at all of the manufacturers, they are working as fast as they can, it’s that making this stuff is hard.”

– A further 1,162 people  died within 28 days of testing positive for Covid-19 as of Thursday – the highest daily reported total since April 21 – while there were 52,618 more lab-confirmed cases of coronavirus in the UK.

– Mr Hancock said he hoped all NHS staff would be offered the vaccine in the next few weeks, possibly even sooner than the February 15 target.

The need for the vaccine to have an impact was illustrated by exhausted staff in one of England’s largest hospitals who told the PA news agency they are working “to the limit” of their ability.

At St George’s Hospital in Tooting, south London, the trust has had to vastly expand intensive care capacity and move under-qualified staff to high dependency roles.

Dr Mark Haden, an emergency department consultant, said: “Everyone is working to the limit, to the threshold of what they’re able to.

“The hospital bed occupancy is very, very high, it has lots of Covid patients as inpatients at the moment. It’s very stressful for staff and that is starting to show.”

Rupert Pearse, professor of intensive care medicine and a consultant at the Royal London, said his own ICU staff are having to care for far more sick patients as he urged the public to heed the “stay at home” lockdown message.

He told BBC Radio 4’s Today programme there would usually be one fully-trained ICU nurse to one ICU patient but that was now being stretched to  ratios of one nurse to three or even four patients.

“As intensive care doctors, we’re not sure how we can together deliver the quality of care that we need to,” he said.

Speaking on behalf of the Intensive Care Society, he said the problems are not just in London, but in other hospitals across the UK, and are not limited to ICU wards.

He added: “In essence, the healthcare available to all of us is not as good as it should be right now.”

According to an NHS England Zoom presentation seen by the Health Service Journal (HSJ), hospital capacity in London will not be enough for the expected rise in patients in the coming weeks.

The data showed that, even if the number of Covid patients grows at the lowest rate considered likely, and measures to manage demand and increase capacity, including opening the capital’s Nightingale hospital, are successful, the NHS in London will be short of nearly 2,000 general and acute (G&A) and intensive care beds by January 19.