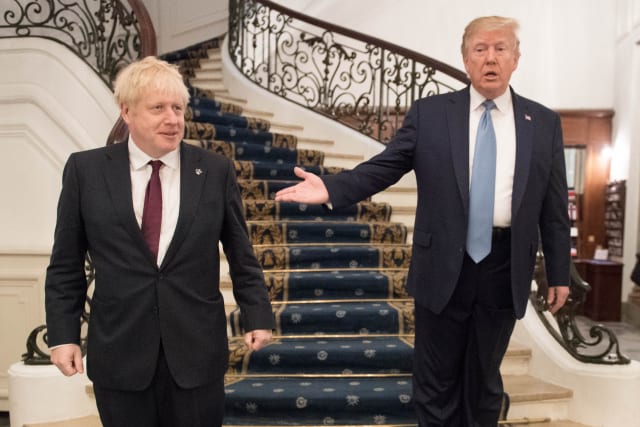 The imminent end of Donald Trump’s presidency concludes a turbulent and at times chaotic chapter in the UK’s “special relationship” with the US.

Both Theresa May and Boris Johnson sought to keep close ties with the White House, but the president’s erratic behaviour made that difficult and occasionally embarrassing.

After pro-Trump supporters stormed the US Capitol to disrupt the process of confirming Joe Biden’s election victory, Home Secretary Priti Patel said the president’s rhetoric “directly led to violence” and the Government is now looking forward to working with the incoming administration.

Here we look back at some of the major moments in the US-UK relationship under President Trump.

Prime Minister Theresa May becomes the first foreign leader to meet President Donald Trump for talks, just a week after his inauguration, and they are pictured in Washington holding hands as they walk.

A row erupts between the US and British authorities after sensitive information is leaked to American news outlets in the wake of the Manchester Arena terror attack.

Two days later, Mrs May says Mr Trump has made it clear the leaks were “unacceptable”.

Mr Trump had mocked Mr Khan for saying there was “no reason to be alarmed” over armed police on the streets of the capital.

It was not the first time the figures had traded blows, as in 2015 Mr Khan reacted to Mr Trump’s plan for a “Muslim ban”.

Mrs May delivers a rebuke to the US president after he claims the Parsons Green Tube bomber was “in the sights” of Scotland Yard.

The Prime Minister said: “I never think it’s helpful for anybody to speculate on what is an ongoing investigation.”

Downing Street and the White House fall out after the president shares an anti-Muslim video posted online by far-right group Britain First.

In response to a Downing Street rebuke, Mr Trump tells the Prime Minister: “Don’t focus on me, focus on the destructive radical Islamic terrorism that is taking place within the United Kingdom.”

Mr Trump uses the NHS as an example of why universal healthcare should not reach US shores, claiming it is “going broke and not working”.

The response from Mr Trump is initially ambiguous after Russia is blamed for the Novichok nerve agent attack on Sergei Skripal and his daughter in Salisbury, but the White House later states it “stands in solidarity” with the UK and joins Western allies in expelling diplomats.

Mr Trump defends US gun laws by claiming a London hospital is “like a war zone” because of the rate of stabbings in the capital.

“They don’t have guns, they have knives,” he said.

The president arrives in the UK for a working visit and immediately lobs a political hand grenade at Mrs May by criticising her approach to Brexit negotiations and lavishing praise on Boris Johnson – saying he would be a “great prime minister” – just days after the Leave campaigner walked out of her Cabinet.

Mr Trump seeks to repair the damage after talks at Chequers, saying the “incredible” Prime Minister is “doing a fantastic job”.

Mrs May later reveals that Mr Trump’s advice on negotiating Brexit was to “sue the EU”.

During the visit, Mr Trump is again spotted holding the Prime Minister’s hand as they attend a banquet at Blenheim Palace, and also walks in front of the Queen during an hour-long trip to Windsor Castle as he inspects a guard of honour.

The verbal attack on Mr Khan comes after the London mayor refuses to block a plan to fly a giant inflatable “Trump baby” near Parliament to coincide with the US president’s visit.

Mr Trump says the draft Withdrawal Agreement reached by the UK and EU setting out the terms for Brexit damages the chances of a UK-US trade deal.

The president says he is surprised how badly Brexit has been handled and warns that another referendum would be “unfair”.

Mr Trump makes a state visit to the UK and continues his feud with Mr Khan.

As he lands in the capital, the president posts a tweet, calling the London mayor a “stone cold loser” who has done a “terrible job”.

On the same trip, the president is photographed apparently fist-bumping the Queen, and taking a handshake from Mrs May’s husband, Philip, on the doorstep of Number 10, but not from the Prime Minister.

He also takes the opportunity to wade into the Brexit debate and describes an independent UK as “a blessing on the world”.

Activists including then-Labour leader Jeremy Corbyn take to the streets of Westminster and cities around the UK to protest at Mr Trump’s visit.

British ambassador to the US Lord Darroch resigns after a leak of embarrassing emails in which he was highly critical of Mr Trump’s “clumsy and inept” administration.

Mr Trump says the diplomat is “not liked or well thought of” and “we will no longer deal with him”.

British teenager Harry Dunn is killed when his motorbike crashes into a car allegedly being driven on the wrong side of the road by American Anne Sacoolas.

Sacoolas claims immunity following the collision outside RAF Croughton in Northamptonshire and returns to the US, where the authorities refuse to extradite her despite calls from the UK Government.

Mr Trump congratulates Mr Johnson on his “great win” in the general election, and says during a visit to the UK for a Nato summit that the UK and US will be free to strike a “massive” new trade deal after Brexit.

Black Lives Matter protests spread to the UK following the death of black man George Floyd at the hands of police officers in Minnesota.

Thousands of campaigners take to the streets on multiple occasions to voice their dismay at Mr Floyd’s death and racial inequality more widely.

The Prime Minister sends good wishes to Mr Trump after the President and First Lady are diagnosed with coronavirus.

Mr Johnson says he is sure Mr Trump will “come through it very well” and adds: “I think obviously everybody’s wishing him and Melania the very best and hoping that they recover speedily, and I’ve no doubt that he will, he’ll make a very strong recovery.”

Mr Trump refuses to accept the result of the US presidential election following his defeat by Joe Biden, and launches a series of doomed legal challenges.

Mr Johnson is one of the first world leaders to speak to president-elect Biden following the protracted election count.

Mr Trump highlights the UK’s difficulties in combating coronavirus as he comes under pressure over his own response to the pandemic.

As London enters Tier 4 restrictions, the president says: “We don’t want to have lockdowns. The cure cannot be worse than the problem itself.”

Mr Johnson condemns the “disgraceful” scenes as pro-Trump supporters storm the US Capitol in an attempt to disrupt the process of approving Mr Biden as president.

Scotland’s First Minister Nicola Sturgeon says the country’s travel ban will apply to Mr Trump amid speculation that he is planning an overseas golf trip during Mr Biden’s inauguration.