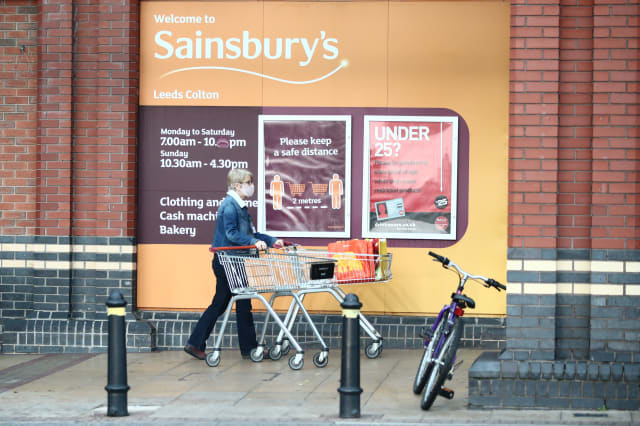 Sainsbury’s said the second English national lockdown in November and subsequent tiering in December helped sales soar, meaning profits for the year are now likely to be £50 million higher than first thought.

The unplanned profit upgrade was revealed as supermarket bosses said sales in the three months to January 2 were up 8.6% on a like-for-like basis.

Over the Christmas period itself – measured by Sainsbury’s as the nine weeks to the same date – these were even higher, growing 9.3%.

The like-for-like measure does not include the permanent closure of 120 standalone Argos stores which were not reopened after the first national lockdown in March. On a total basis, sales during the three-month period were up 6.8%.

Sainsbury’s said there was strong growth in both its grocery stores and at Argos, which remained open for click-and-collect orders, alongside huge surges in online deliveries.

Argos sales rose 8.4% and non-food sales were up 6% as non-essential retailers were forced to either close stores or only offer click-and-collect services.

Online grocery sales jumped 128% over the period, with total digital sales up 81%, representing 44% of total sales for the group.

Around 1.1 million online food orders were delivered in the 10 days leading up to Christmas, the grocer added.

As a result, underlying pre-tax profits for the year are expected to hit £330 million, compared with previous guidance of £270 million – although this will be down on the £586 million recorded last year due to Sainsbury’s agreeing to pay its £410 million business rates bill.

He said: “While people had smaller gatherings, they still treated themselves, with Taste The Difference sales up 11%.

“Premium champagne sales were up 52%, Taste The Difference party food was popular throughout December, and people did more home baking than usual, with mincemeat sales up 24%.

“Customers still wanted New Year’s Eve at home to feel special and we sold a record number of steaks.”

Mr Roberts added: “Argos sales were up over 8%, with fast-track home delivery and click and Collect beating expectations for Black Friday and Christmas.”