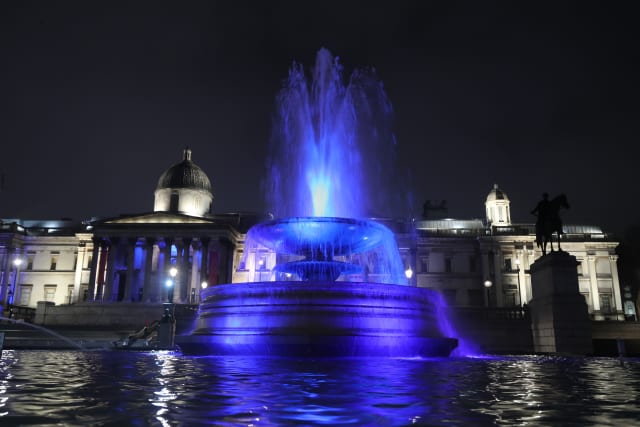 Iconic landmarks in London lit up blue in a renewed gesture of thanks to the NHS and frontline workers.

Well-known buildings and sporting and entertainment venues across the capital illuminated in blue on Thursday evening to celebrate the hundreds of workers who have put their lives on the line during the pandemic to help others.

Trafalgar Square, Wembley Arch and the London Eye along the South Bank were among several landmarks that joined the #LightItBlue campaign which began last year.

Blue lights beamed from the spires of The Shard, as well as the globe atop Madame Tussauds.

The Mayor of London, Sadiq Khan, said: “It is a very challenging time for our city and nation, and we owe a great debt to our NHS and key workers who are working so incredibly hard to serve our city.

“By lighting up buildings in blue in their honour, our capital is again standing together to thank them for their tremendous efforts.

“These workers deserve our praise and our thanks, and I urge Londoners to continue following the lockdown rules so they can play their part in supporting the NHS and save lives.”

London Fire Brigade shared its support on Twitter as it paid tribute to “all those working incredibly hard in a national effort against #Covid19”.

It coincided with the revamped Clap for Carers, which was relaunched as Clap for Heroes, on Thursday night which encouraged people to once again applaud outside their homes for “every hero who has played their part through the pandemic”.