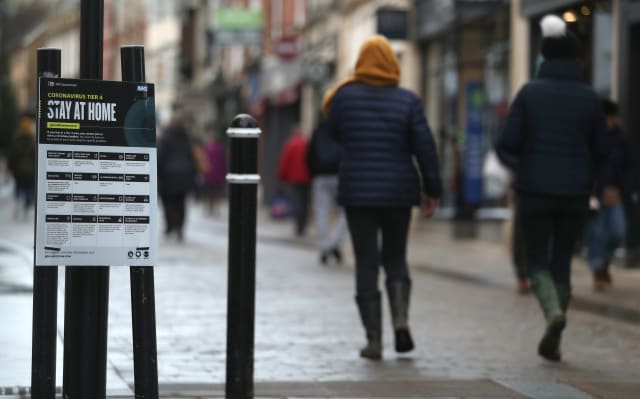 The BRC data showed that footfall across UK shopping destinations decreased by 46.1% in December against the same month last year.

However, it stressed that this represented an improvement from November, when England was under lockdown restrictions.

The new figures showed a particularly tough Christmas shopping period for high street stores, which had a 49.5% drop in footfall in December.

Retail parks were more resilient as they showed a 17.3% fall.

“After an encouraging start to the month Christmas shopper numbers dwindled as December progressed, due in large part to the creation of Tier 4 in England and increased restrictions elsewhere in the UK,” said Helen Dickinson, chief executive of the British Retail Consortium (BRC).

“London, the South East and Wales were hardest hit, with footfall dropping by over four-fifths in the final week.

“However, it has been a hard year for the entire country, with footfall down by 43% in 2020 compared to the previous year.”

Andy Sumpter, retail consultant at ShopperTrak, said: “Not even the advent of festive season could turn around the fortunes of the high street in December.”

It said sales lifted higher at the start of the month following the end of November’s lockdown in England, but tumbled later in the period as strict restrictions were enforced across large areas of the UK.

Lifestyle sales declined by 5.4% during December despite Christmas, while fashion sales dipped 6.2%.

Sophie Michael, head of retail and wholesale at BDO, said: “Shoppers were ready to spend at the start of December, providing retailers with some much-needed Christmas cash.

“This optimism was scuppered, however, as lockdowns returned across the country, dampening consumer sentiment, with discretionary spend following close behind.”