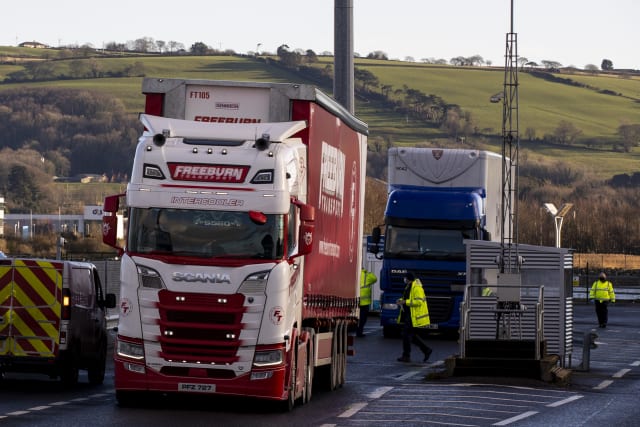 The Northern Ireland protocol is proving a “monumental” challenge for officials implementing EU rules at the ports, the chief vet said.

On New Year’s Day, following the end of the Brexit transition, some traders arriving did not pre-notify about their goods, meaning that had to be done retrospectively.

The Government’s senior vet, Dr Robert Huey, said he expected traffic through the ports next week to be busier and added companies wanted to comply.

He said: “Pieces are coming together, it is just a matter of time and giving the industry time to adjust to this monumental challenge.”

The number of vehicles checked by Mr Huey’s officials had reached 133 by Wednesday.

Some of his staff are also in Cairnryan in Scotland to conduct checks.

Dr Huey added: “We have climbed a fair mountain this week.”

He said the industry had made great steps towards compliance and no lorryloads have been sent back to Great Britain yet – but predicted that would happen eventually.

Aodhan Connolly, director of the Northern Ireland Retail Consortium which represents larger businesses, said industry faced another “cliff edge” in April when a grace period for transporting some products ends.

“We are able to move things but there is a lot of ironing out to do, wrinkles within the system.”

He warned: “Some suppliers have opted out of Northern Ireland for the moment.”

That primarily involves a small number of firms not aware of the rules on parcel deliveries after last-minute official guidance was issued.

Mr Connolly said his NI Business Brexit Working Group was working to get those businesses back onboard.

He added some people were only being trained on New Year’s Eve for changes introduced the following day.

“This is the opening skirmish in what is going to be a truncated embedding period while everyone gets used to the new systems,” he said.

Mr Connolly acknowledged he was becoming like Oliver Twist, always asking for more from the UK Government in addressing the next Brexit challenge.

He told Stormont’s agriculture committee: “We need a sustainable and simplified way of working to ensure we continue to give choice and affordability to Northern Ireland consumers and allow Northern Ireland businesses to be competitive.”