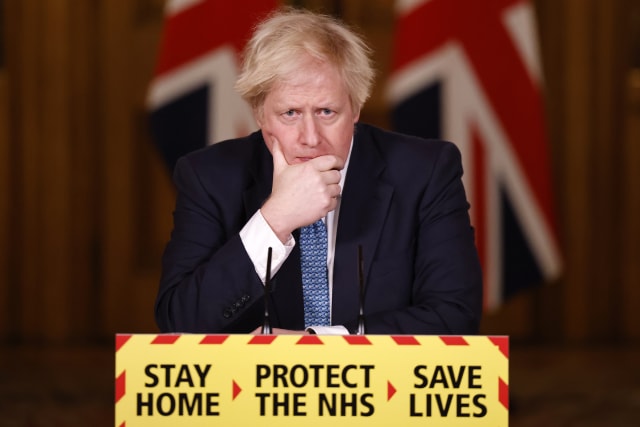 Boris Johnson has pledged an unprecedented national effort to roll out Covid-19 vaccines across the UK as GPs warned of “teething problems” in some areas with doctors getting supply.

The Prime Minister said almost 1.5 million people have now been vaccinated against the disease and the Government intends to give everyone in care homes a jab by the end of January.

Speaking at a Downing Street press conference, the Prime Minister said people had a right to know how quickly jabs could be rolled out and stressed the NHS was ready to administer vaccines as quickly as they could be supplied by manufacturers.

The Prime Minister said there would likely be “difficulties” in the rollout of the vaccine and there would be some “lumpiness and bumpiness”.

“Let’s be clear, this is a national challenge on a scale like nothing we’ve seen before and it will require an unprecedented national effort,” he said.

“Of course, there will be difficulties, appointments will be changed but… the Army is working hand in glove with the NHS and local councils to set up our vaccine network and using battle preparation techniques to help us keep up the pace.”

Mr Johnson said that the most vulnerable groups which the Government plans to have vaccinated by mid-February accounted for 88% of all those who have died in the UK during the pandemic.

He said “if all goes well” then hundreds of thousands of vaccines can be administered per day by January 15 and “it is our plan that everyone should have a vaccination available within a radius of 10 miles”.

He added: “It follows from that that the limits will not be on our distributional power but on the supply of vaccines, and I have no doubt that we have enough supply to vaccinate these four groups by the February 15 deadline.

“We also have the distributional network to do it and to continue an expanding programme down the priority list.”

Both AstraZeneca and Pfizer have said they are supplying the vaccine as quickly as possible and to schedules agreed with the Government.

However, there are thought to have been long periods needed for regulators to test batches of vaccines before they are released to the NHS.

The Medicines and Healthcare products Regulatory Agency (MHRA) is understood to have taken on more staff to help speed this process up.

On Thursday, GP surgeries across England received their first doses of the Oxford vaccine.

Health Secretary Matt Hancock went to Bloomsbury Surgery in London to launch the mass rollout only to discover the delivery of the jabs had been delayed.

Dr Ammara Hughes said Mr Hancock was “quite surprised actually to learn that we don’t know when all of our deliveries are coming, they’re very ad hoc”.

Appearing before MPs later, Mr Hancock said there were no delays in the supply of the vaccine, it was simply that producing it took time.

“The capacity constraint is the supply of the approved vaccine,” he said, rather than the ability to administer it to patients.

“That does not mean there has been a delay and it is not a criticism at all of the manufacturers, they are working as fast as they can, it’s that making this stuff is hard.”

Professor Martin Marshall, chairman of the Royal College of GPs, said family doctors and their teams were ready to vaccinate patients.

But he warned: “There still appear to be some issues with delivery of vaccine supply to some surgeries.

“We do not underestimate the scale of the challenge that NHS England are facing getting supplies to vaccine sites across the country.

“What’s important is that communication to practices about when they will receive a supply of vaccine is clear and reliable, with as much notice as possible – and that any last-minute changes of plan are minimised.”

He said having to change appointments if there were delays was “frustrating and demoralising for GP teams – not to mention confusing and disappointing for patients.”

He continued: “A vaccination programme being delivered at this pace and scale is bound to face teething problems.

“It’s vital that GPs and their teams on the ground, running vaccination clinics, are communicated with clearly and listened to – and that any concerns they have about the rollout taken seriously, so that they can be addressed.”

– A further 1,162 people died within 28 days of testing positive for Covid-19 as of Thursday – the highest daily reported total since April 21 – while there were 52,618 more lab-confirmed cases of coronavirus in the UK.

At the Downing Street press conference, NHS England chief executive Sir Simon Stevens said there will be a “huge acceleration” in the vaccination programme over the coming weeks.

Sir Simon said there were 39 days left to meet the target set by the Prime Minister to vaccinate the most vulnerable.

“We need a huge acceleration if we are, over the next five weeks, going to vaccinate more people than we typically vaccinate over five months during a winter flu programme,” he said.

He said the “bulk” of the vaccinations would be carried out at GP surgeries and pharmacies, but that the number of hospital hubs and large-scale vaccination centres were also being increased.

In Pictures: UK ready for wrath of Storm Christoph with major incidents declared