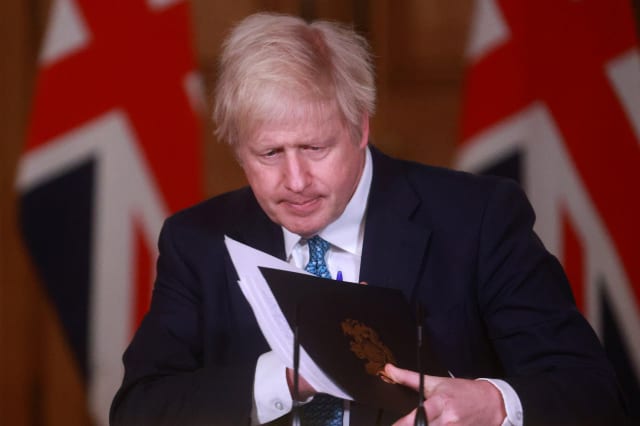 MPs will return to Westminster to vote on regulations enforcing England’s national lockdown as the stringent restrictions entered into force overnight amid spiralling coronavirus cases.

The Commons has been recalled from its Christmas recess for the second time, to debate and retrospectively vote on the measures announced by the Prime Minister on Monday.

Boris Johnson will update MPs on the new controls – which include the closure of schools to most pupils and a return to the stay at home order – before a vote due in the evening.

The measures are expected to pass with ease, with Labour set to support the motion.

Education Secretary Gavin Williamson will also outline a package of support for young people, after students in England were told this year’s GCSE and A-level exams would be scrapped.

The regulations enforcing a national lockdown in England came into effect at 00.01 on Wednesday, as new figures suggested one in 50 people had coronavirus last week.

Data from the Office for National Statistics suggested 1.1 million people in private households in England had Covid-19 between December 27 and January 2.

His comments came as the number of daily confirmed cases of coronavirus in the UK topped 60,000 for the first time, while a further 830 people died within 28 days of testing positive for Covid-19 as of Tuesday.

But in a sign of progress, the Prime Minister said that more than 1.3 million people have been vaccinated against the virus across the UK so far, including 23% of all the over 80s in England.

Prof Whitty, speaking alongside Mr Johnson at a Downing Street press conference on Tuesday evening, said the vaccine timetable was “realistic but not easy”, and that the NHS would have to use “multiple channels” to get it out.

But questions have been raised over the roll-out, with a pharmacy chief questioning why the NHS is “scrabbling around” for vaccinators when his industry was offering to help.

Simon Dukes, chief executive of the Pharmaceutical Negotiating Services Committee, told The Telegraph: “Rather than scrabbling around trying to find retired GPs and nurses and anyone who has possibly dated skills, you’ve got an army of thousands of pharmacists up and down the country who administer the flu jab every winter.

“We’ve been telling the NHS that we’re ready, willing and desperate to help. But we’ve been met by a de facto silence.”

Meanwhile The Times reported that two million doses of the Pfizer vaccines held back for boosters would be distributed in the next fortnight.

Labour leader Sir Keir Starmer urged the Government to use the lockdown to create a “round-the-clock” vaccination scheme in order to end “this nightmare”.

In a televised response to Mr Johnson’s statement, Sir Keir also confirmed he would back the new restrictions in the Commons vote on Wednesday.

In other developments, Mr Johnson announced that the Government would be “bringing in measures to ensure that we test people coming into this country and prevent the virus from being readmitted”.

And he declined to guarantee that all children would be back in school before the summer holidays but said he is full of “optimism and fundamental hope” that things will be different in the spring.

He told the briefing that he had “no choice” but to plunge England into a third national lockdown in light of the figures, with the number of people in hospital with the virus in England higher than ever.

Professor Whitty said that because of the spike in people being admitted to hospital there will “inevitably” be an increase in the number of coronavirus deaths later this month.

And he told the press conference: “If we did not do all the things all of us must now do, if people don’t take the stay at home seriously, the risk at this point in time, in the middle of winter with this new variant, is extraordinarily high.”

He said the risk level will gradually decrease over time with measures being “lifted by degrees possibly at different rates in different parts of the country, we’ll have to see”, but said some restrictions may have to be introduced again next winter.

All of the UK is now under stringent coronavirus restrictions. First Minister Nicola Sturgeon imposed a lockdown on Scotland for the rest of January, with a legal requirement to stay at home and schools closed to most pupils until February.

Schools and colleges in Wales will also remain closed until at least January 18 and move to online learning.

And in Northern Ireland – which is already under a six-week lockdown – “stay at home” restrictions will be brought back into law and a period of remote learning for schoolchildren will be extended.