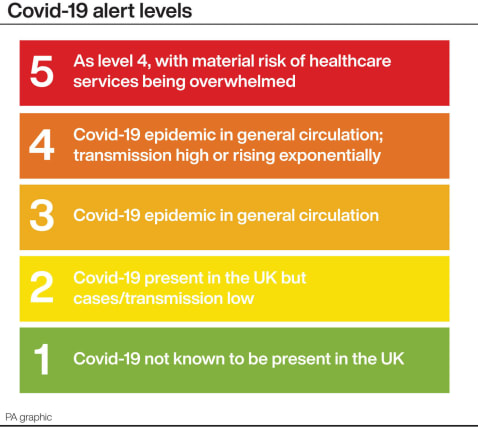 Boris Johnson has imposed the toughest national lockdown in England since March, shutting schools to most pupils to prevent the NHS being overwhelmed by surging coronavirus infections.

In a televised address to the nation on Monday evening, the Prime Minister pinned hopes on the rollout of vaccines to ease the restrictions, but warned that the measures being introduced immediately are expected to last until mid-February.

He told the country to stay indoors other than for limited exceptions and bowed to significant pressure to order primary schools, secondaries and colleges to move to remote teaching for the majority of students from Tuesday.

His move followed Nicola Sturgeon imposing a lockdown on Scotland for the rest of January, with a legal requirement to stay at home and schools closed to most pupils until February.

In a bleak statement, Mr Johnson said the new variant of coronavirus, which is up to 70% more transmissible, was spreading in a “frustrating and alarming” manner and warned that the number of Covid-19 patients in English hospitals is 40% higher than the first peak.

“As I speak to you tonight, our hospitals are under more pressure from Covid than at any time since the start of the pandemic.

“The weeks ahead will be the hardest yet but I really do believe that we’re entering the last phase of the struggle, because with every jab that goes into our arms we’re tilting the odds against Covid and in favour of the British people.”

He said people in the top four priority groups would receive a first vaccine dose by mid-February “if things go well and with a fair wind in our sails”, to allow restrictions in the nation’s third national lockdown to be eased.

It is thought that measures are unlikely to be relaxed until around 13 million people aged over 70 or classed as extremely clinically vulnerable have received the vaccine and been given enough time to be protected – about two to three weeks after getting the jab.

But Mr Johnson issued a series of ifs – on the public following the rules and understanding of the virus not dramatically shifting – before the nation can start “cautiously” moving down through tiered restrictions with schools reopening after the February half-term.

He said the lockdown will become law in the early hours of Wednesday, while MPs will retrospectively be given a vote after they are recalled early from the Christmas break, but the public should follow the rules immediately.

Labour leader Sir Keir Starmer said the measures are “necessary” and his party supports them, meaning that although Mr Johnson will want to minimise the scale of any Tory rebellion the Government is almost certain to win the vote.

The Prime Minister’s statement came after the chief medical officers for the first time raised the UK to the highest level on the Covid-19 alert system.

They warned the NHS was at risk of being overwhelmed within 21 days “in several areas” without further action.

Strong stay-in-place messaging will return, with leaving home only permitted for limited exceptions such as shopping for necessities including food and medicine.

The public were told to work from home unless it is impossible to do so, such as for critical workers and those in the construction industry.

Exercise will be permitted with household or support bubble members or with one other person from another household, but is advised to be limited to once per day and carried out locally.

Non-essential shops will have to close, prompting business leaders to call for fresh financial support to prevent a wave of closures and redundancies.

Exams will again face disruption as schools close to all pupils other than the children of key workers and vulnerable youngsters until after the February half-term. University students will not be allowed to return to their institutions.

The Prime Minister said he understands the “inconvenience and distress” the late change will cause to millions of parents and that many will ask why he delayed the decision.

“The answer is simply that we have been doing everything in our power to keep schools open, because we know how important each day in education is to children’s life chances,” he said.

Restaurants and other hospitality venues can continue delivery or takeaway services but will no longer be permitted to serve alcohol.

Outdoor gyms, tennis courts and golf courses must close and outdoor team sports will be prohibited.

Premier League football and other elite sports with testing regimes and bubbles will be allowed to continue.

The extremely clinically vulnerable who were previously told to shield will be advised stay at home and only leave for medical appointments and exercise.

The fresh restrictions were imposed as ministers hailed the rollout of the new Oxford-AstraZeneca vaccine which begun when retired maintenance manager Brian Pinker, 82, became the first person to receive the jab outside clinical trials.

Welsh education minister Kirsty Williams said schools and colleges in Wales will remain closed until at least January 18 and move to online learning.

Northern Ireland’s First Minister Arlene Foster said there were “very difficult decisions” to take in a “dire situation” as ministers took part in an emergency meeting.

Scotland’s First Minister Ms Sturgeon announced a legally enforceable stay-at-home order for all of January in mainland Scotland and Skye.

She told MSPs: “It is no exaggeration to say that I am more concerned about the situation we face now than I have been at any time since March last year.”

Mr Johnson was alarmed by new data shown to him on Monday to suggest cases were rising rapidly in every part of England.

He said the number of Covid patients in hospitals increased by nearly a third in the last week to almost 27,000 – more than 40% higher than in April’s peak.