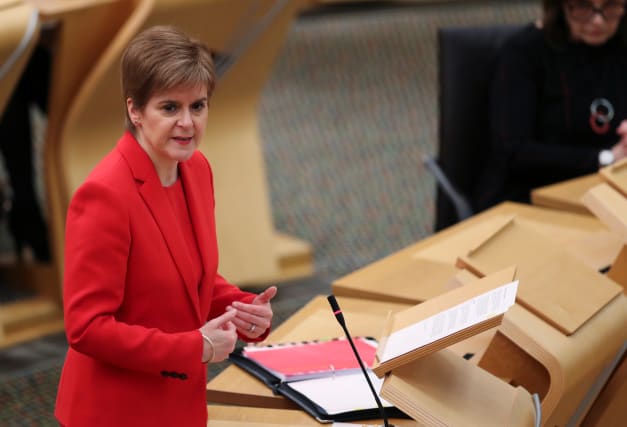 Most of Scotland will be placed in lockdown from Tuesday for the whole of January to tackle the rising spread of the new coronavirus strain, Nicola Sturgeon has announced.

The First Minister said a legally-enforceable stay-at-home order will apply from Tuesday to areas currently under Level 4 – mainland Scotland and Skye -with exemptions in place for carers, essential shopping, unlimited outdoor exercise and being part of an extended household.

Schools and nurseries will remain closed to most pupils until February, meaning an additional two weeks of home learning for most pupils.

Ms Sturgeon announced the changes in a statement at the Scottish Parliament, which was recalled from recess to discuss stricter measures, telling MSPs taking no action could see Covid-19 capacity in hospitals overrun within “three or four weeks”.

The First Minister said the lockdown decision was taken after a meeting of the Scottish Cabinet on Monday morning.

She said: “I can confirm now, in summary, that we decided to introduce from tomorrow, for the duration of January, a legal requirement to stay at home except for essential purposes. This is similar to the lockdown of March last year.”

The Scottish Government had already announced school holidays were being extended to January 11, with ministers having originally planned for remote learning until January 18.

However, schools will still be open for the children of key workers who cannot work from home, and for vulnerable youngsters.

The First Minister said Scotland recorded 1,905 new coronavirus cases in the past 24 hours, down from the 2,464 reported on Sunday. The daily test positivity rate is 15%, a marginal drop from 15.2% on Sunday.

Currently, the whole of mainland Scotland and Skye is under the toughest tier of restrictions, banning indoor visits except in limited special circumstances and restricting meetings outdoors to six people from two households.