Lockdown looms as Johnson prepares to address the nation 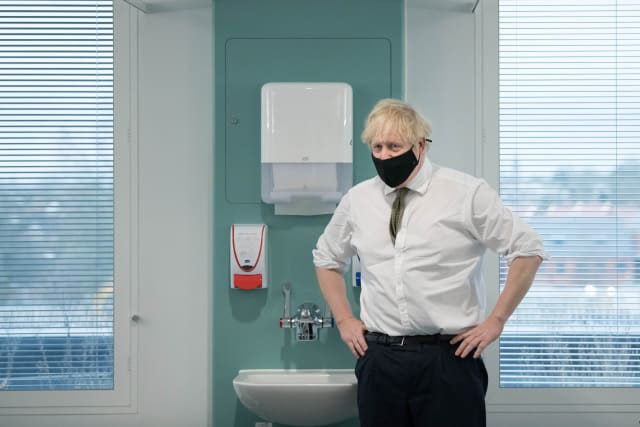 Boris Johnson will set out emergency measures to control the spread of coronavirus amid concerns the NHS risks being overwhelmed.

The Prime Minister will make a televised address at 8pm on Monday after coming under intense pressure to announce a new national lockdown.

Parliament will be recalled on Wednesday and Downing Street said that the move was in response to the “rapidly escalating” numbers of infections following the emergence of the new variant.

Government sources indicated the UK’s chief medical officers have agreed to raise the Covid-19 alert level to five – its highest – meaning “transmission is high or rising exponentially” and “there is a material risk of healthcare services being overwhelmed”.

The alert level is based on a recommendation by the Joint Biosecurity Centre to the chief medical officers.

The latest figures showed a further 407 people have died within 28 days of testing positive for Covid-19 as of Monday and there were a record 58,784 more lab-confirmed cases of coronavirus in the UK.

A No 10 spokesman said: “The spread of the new variant of Covid-19 has led to rapidly escalating case numbers across the country.

“The Prime Minister is clear that further steps must now be taken to arrest this rise and to protect the NHS and save lives.”

Earlier, Mr Johnson had said there was “no question” that further action was needed and there would be “tough” weeks ahead.

The move comes as Nicola Sturgeon announced Scotland will go into lockdown for the rest of January, with a legal requirement to stay at home and schools closed to most pupils until February.

Setting out the measures to come into force from Tuesday, the First Minister told MSPs in Holyrood: “It is no exaggeration to say that I am more concerned about the situation we face now than I have been at any time since March last year.”

The latest data show a 41% rise in the number of confirmed coronavirus patients in hospital in England between Christmas Day and January 3, figures which have caused alarm in Whitehall and the health service.

While ministers hailed the rollout of the new Oxford-AstraZeneca vaccine, Mr Johnson warned the nation needed to prepare for some “tough” weeks ahead as the jab was extended to the most vulnerable.

With 78% of England’s population already under the toughest current restrictions, ministers have been examining how successful the Tier 4 measures – which came into force for the first time on December 20 – have been.

“In the face of exponential growth even waiting an extra day causes many avoidable deaths so these plans must now be urgently accelerated,” he said.

Senior Tory Neil O’Brien said procedures “need to toughen up at the border” in order to prevent cases being imported – a particular concern given the potential for new variants such as the one in South Africa.

Labour leader Sir Keir Starmer said he hoped the Prime Minister would respond to the “clear calls for tough national restrictions” and also include the closure of England’s schools.

He told the PA news agency new measures were needed to “get the virus under control, protect the NHS and create the space for the vaccine to be rolled out as quickly as humanly possible”.

Sir Keir said the Government should aim to vaccinate two million people a week this month, rising to four million in February.

Ministers hope the Oxford vaccine – which is easier to distribute than the other approved jab from Pfizer/BioNTech – could provide a route out of the coronavirus crisis, but it could be months before sufficient numbers have received their first shot.

Ministers have said the NHS has the capacity to deliver two million doses a week but supplies are limited.

While some 530,000 doses are to be available from Monday, the Department of Health and Social Care (DHSC) said tens of millions more are to be delivered in the coming weeks and months once batches have been quality checked.

Mr Johnson said: “We have the capacity, the issue is to do with supply of the vaccine.

“It’s not so much a manufacturing issue although that’s part of it.

“Each batch needs to be properly approved and quality controlled.”

Mr Johnson has so far resisted calls to close schools.

Education unions have urged the Government to “pause” a return to the classroom until the safety of staff and pupils can be guaranteed.

In a joint statement, the GMB, NAHT, NASUWT, NEU, Unison and Unite unions said there is a “serious risk” of staff falling ill while the rate of infection is so high.

“Bringing all pupils back into classrooms while the rate of infection is so high is exposing education sector workers to serious risk of ill-health and could fuel the pandemic,” the unions said.

However, Mr Johnson – who has made keeping schools open a top priority – said “the risk to kids is very, very small” and “the risk to teachers is no greater than it is to anyone else”.