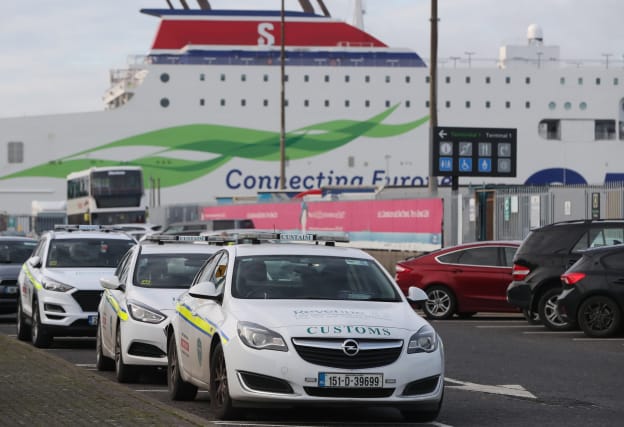 There is a slow but steady build-up of freight movements between Britain and Ireland, a Dublin Port official has said.

Hauliers had warned of “mayhem” at ports post-Brexit which has not yet materialised.

The first ferries arrived in Ireland from Britain under new trade rules on Friday following the end of the Brexit transition period.

Tom Talbot, head of Revenue’s customs operations for Dublin Port, said on Monday they are still seeing very low levels of trade because of the time of year.

“We’re talking about extremely low numbers,” Mr Talbot said. “The reality is that the full blown traffic at the port would be a multiple of what it is today.”

He said it would be “fair to say” that traffic through the port was less than half of a normal day, but he would not be drawn on the exact volumes.

He added that officials expected it to be much busier in the next couple of weeks.

Speaking on the fourth day of the new post-Brexit rules coming into force, Mr Talbot said the lower volume levels had helped the situation.

“This has provided a good opportunity for ourselves, for trade, for business to build familiarity with the system, with new procedures,” he said.

“It allow firms to build familiarity with procedures that apply to trade and new trade with Great Britain and the arrangements that are in place across both Rosslare and in Dublin Port.

“Even for businesses that are familiar for a number of years with dealing with third-country trade, the fact that this trade never arises on roll-on and roll-off traffic is a new feature.

“We are now into a much more time-sensitive case and this is moving things a little faster.”

He said that customs issues that arise are being resolved as quickly as possible by all agencies.

On Friday, several lorries were turned away in Holyhead before they boarded ferries destined for Dublin because they did not have the correct paperwork completed.

On Sunday Mr Talbot said officials in Dublin refused to allow a handful of trucks board an Irish Ferries’ ship in Dublin destined for the UK due to not having the right documentation in place.

But Mr Talbot said officials had assisted the hauliers to fill in the correct forms.

Hauliers have been warned that only trucks with the correct documentation will be allowed to board ferries.

Mr Talbot added that it would take time for drivers and hauliers to get used to the new post-transition period procedures.

If all the correct documents and declarations are in place, then drivers will get a green light that will allow them to pass through the port.

Mr Talbot said that up to 92% of drivers are getting green lights.

“We are seeing a little bit of more orange checks at the moment, but that’s because it is bedding in, but you get your green and that’s all you have to do.”

Mr Talbot said the Government has invested substantially in infrastructure, staffing and IT systems.

“We are looking at a billion euro being spent on Brexit-related infrastructure,” he added.

He also said that a green-approved lorry will take just minutes to leave the ferry and the port.

“That investment we put in is there for a reason and will minimise delays. There will be delays, we are now dealing with a third country but we want to minimise those delays.”

Mr Talbot also said Dublin Port is staffed 24 hours a day, seven days a week which had allowed officials to intervene and support trade and business when problems arise and when they arise on a real-time basis.

He also urged drivers to check their custom channel, within 30 minutes of them arriving in port, which helps in the transition of traffic.