Arlene Foster says NI is in a ‘dire situation’ 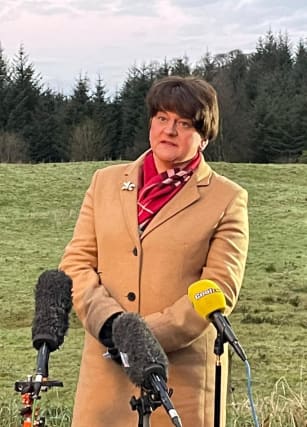 Stormont ministers are expected to reconvene on Tuesday.

The closure of schools has been under discussion.

The country is in the second week of a six-week lockdown in which non-essential retail is closed, and people are urged to stay at home.

But, amid soaring numbers of coronavirus infections, ministers took part in an urgent meeting on Monday evening, with Mrs Foster saying the Stormont Executive has “very difficult decisions to take”.

The most recent plan was for primary pupils to be taught remotely for the week from January 4-8, while for secondary school Years 8 to 11, remote learning is due to last for the entire month.

She added: “I was very clear that I would like to keep schools open for as long as possible but if it is the case that we do need to close schools as we did in March of last year, I will deeply regret that, but we will of course take whatever action is needed based on the medical evidence in front of us.”

The First Minister also expressed disappointment at the number of gatherings, and said ministers will speak to police about enforcement.

She added: “Just today I was sent photographs of Portstewart and Portrush over the past couple of days and there were huge crowds gathering together and I really regret that.”

Almost 100 house parties were broken up by police in Northern Ireland over the last week, despite strict rules against indoor gatherings.

The Police Service of Northern Ireland also issued 339 £200 fines for breaches of the coronavirus regulations.

Everyone aged over 80 will be inoculated in Northern Ireland within a few short weeks, health officials said, in a “step change” in the race against time to deliver immunity.

West Belfast GP Michael McKenna administered the first coronavirus jabs, releasing older people from the “jail” sentence they have been under while shielding for the last nine months.

Afterwards, white-bearded John Grey, 84, leaned on his walking stick and said: “I am relieved, let’s say that.”

Up to 11,000 people aged over 80 are set to receive the jab this week as the health service struggles with soaring number of hospital admissions.

Another 1,801 people have tested positive for Covid-19, the Department of Health said on Monday.

That makes 12,507 diagnoses over the last seven days.

Another 12 deaths have been reported.