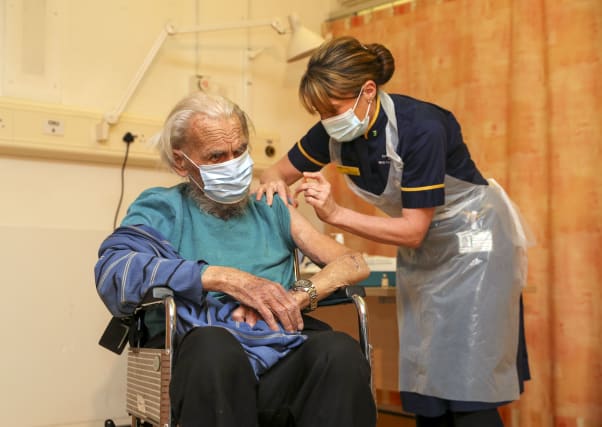 Almost 14 million people could have received a Covid vaccine by the middle of February, in line with plans announced by the Prime Minister.

In a TV address announcing the third national lockdown for England, Boris Johnson said officials were hoping for all people in the top four priority groups to have received a jab in the coming weeks.

Tweeting afterwards, vaccine minister Nadhim Zahawi said the NHS “family will come together” to get 13.9 million doses administered by the middle of next month.

Speaking from Downing Street, Mr Johnson outlined the NHS’s “realistic expectations” for the vaccination programme in the coming weeks.

He said: “By the middle of February, if things go well and with a fair wind in our sails, we expect to have offered the first vaccine dose to everyone in the four  top priority groups identified by the Joint Committee on Vaccination and Immunisation.”

Theoretically, this means that all people over the age of 70 should expect to have an inoculation soon, as well as healthcare staff and others who are vulnerable.

Top of the priority list are people who live and work in care homes, followed by people over the age of 80 and frontline health and social care workers – including NHS staff.

Next on the list are people over the age 75, and the fourth group are people aged 70 and those classed as clinically extremely vulnerable.

This last group – who are the same as those who have been advised to shield – includes people such as organ transplant recipients and cancer patients.

Mr Johnson said of the top four priority groups: “If we succeed in vaccinating all those groups, we will have removed huge numbers of people from the path of the virus”.

“And of course that will eventually enable us to lift many of the restrictions we’ve endured for so long.”

The news comes on the same day the first patients received the Oxford/Astra Zeneca jab, which is now being handed out alongside the Pfizer vaccine.

The Prime Minister referred to the existence of the vaccines as the “one huge difference” in fighting the pandemic now compared to last year.

“We’re now rolling out the biggest vaccination programme in our history,” he added.

Hospitality businesses have pledged to help with the rollout, offering their spaces which are currently unused due to ongoing closures.

She explained: “Our sector is sitting on well-ventilated, Covid-secure spaces such as hotels, conference centres, pubs and restaurants which can be used and businesses are already coming forward to offer locations to expedite a mass vaccination programme.”