Three people on yacht rescued after drifting near explosive-packed wreck 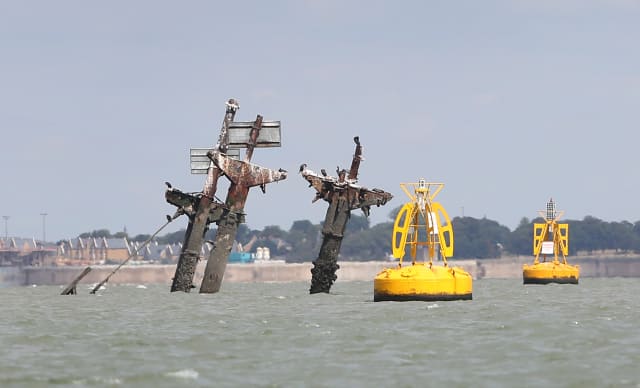 Three people have been rescued after their boat drifted dangerously close to a shipwreck packed with explosives.

The 27ft yacht was floating near the mouth of the Medway Estuary in Kent on Saturday morning, close to where the wreck of the SS Richard Montgomery lies beneath the surface.

Lifeboat crew were despatched from Sheerness in Kent to help the yacht and ensure the safety of those on board.

The all weather lifeboat was on the scene at 11.09am and confirmed the three people were OK.

A tow rope was then fixed to the yacht and it was pulled to safety before being transferred to lifeboat crew from Southend to take it back to its mooring.

Cargo ship SS Richard Montgomery was anchored in Sheerness in Kent when it grounded and broke up in 1944.

The wreck is notable because it is packed with 1,400 tonnes of explosives.

As a result, it is monitored round the clock by port authorities and protected by a 500-metre exclusion zone.

Concerns that the explosives on board the wreck may detonate were raised in 2019 at Westminster by Labour peer Lord Harris of Haringey.

The Maritime and Coastguard Agency, which monitors the condition of the wreck and carries out regular surveys, said at the time that the risk of a major explosion “is believed to be remote”.