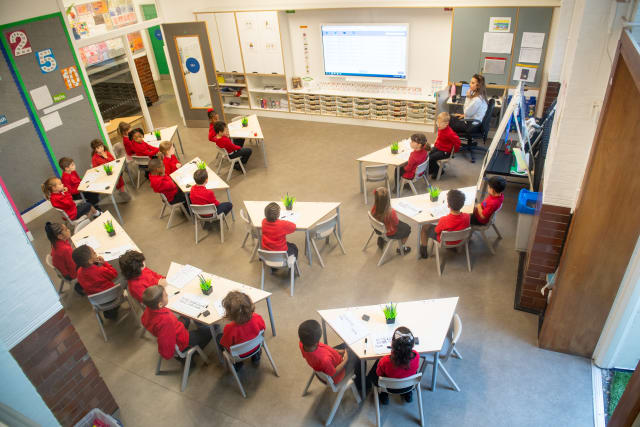 Uncertainty over reduced staffing numbers and the safety of vulnerable students is causing “confusion and stress” among primary school staff, a teacher has said.

With some teachers voicing concerns over balancing support for pupils and the risk to their own health, the The National Education Union (NEU) has provided template letters – under section 44 of the Employment Rights Act – for those who feel too unsafe to return to work.

It comes as Boris Johnson urged parents to send primary-age children back to school on Monday, insisting that education was a “priority.”

One primary school teacher in Bristol said the most recent school term had been “horrendous” and that she had begun taking medication due to anxiety.

“I’ve nearly quit teaching multiple times and the potential of having a skeleton staff, so no support with behaviour or no teaching assistant, is slightly terrifying,” she told the PA news agency.

“I’m moderately vulnerable and have an individual risk assessment so I’ve said I’ll come in if they reduce contact with parents and no mixing of adults in my bubble.”

The 26 year-old, who did not wish to be named, said she “did not feel right” not being there to support vulnerable children in her classes, but said she would sign a letter under section 44 if she felt unsafe at work.

“The reason I haven’t signed it is that I’m so so worried about our kids due to their home situations – I’ve been having bad dreams about their experiences,” she said.

“I know how awful my kids’ home situation is. I don’t feel right not being there for them.

She added that after two years at the school she had almost been signed off from work for the first time in mid-November, following recommendations from her doctor.

“I’ve never ever been close to that before,” she said.

“The holidays have done me a world of good but I had a panic attack during the last day of school and am really dreading going back.”

The year two teacher said that other teachers had voiced similar concerns about the lack of clarity on precautions, ahead of the school’s reopening, but that many remained “on the fence” about the NEU letters.

“I’m so surprised that the government or our academy haven’t stepped up,” she said.

“Our teacher Whatsapp group has been pinging all day with messages of confusion and stress.

“We also had a NEU meeting with our school rep which was very interesting and most people were very much on the fence about signing the NEU letter concerning section 44.

“We would like our academy to inform us of how they plan to approach this, whether that is increasing safety precautions or closing to all bar key workers and vulnerable pupils.”