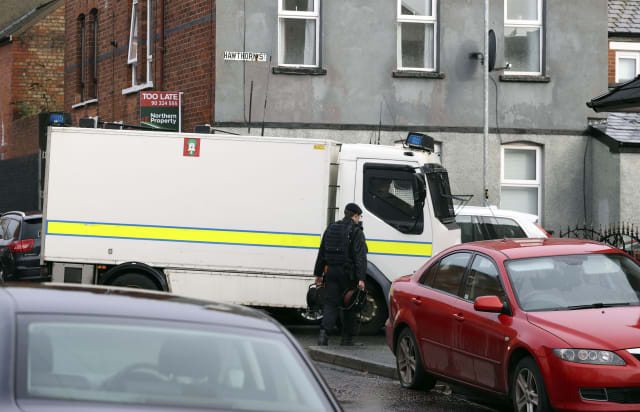 The number of times that army bomb experts have been called out in Northern Ireland has hit a three-year high.

Ammunition Technical Officers (ATO) based in the region can be requested to assist police where it is believed there may be explosives.

Officers from explosive ordnance disposal and search regiments were called out 229 times between August 1 2018 and July 31 2019 according to the most recent available government figures.

This period includes the bombing of Londonderry court house by dissident republicans in January 2019, as well as the planting of a bomb under a police officer’s car at Shandon Park Golf Club in east Belfast in June 2019.

Previously the number of calls outs had been steadily dropping from the last peak of 460 in 2009/10.

Army personnel were described in a report to parliament last year by David Seymour, the independent reviewer of justice and security in Northern Ireland, as “concerned” that EOD activity is “ramping up” and the devices with which they have to deal are showing “signs of a growing sophistication”.

ATO were described as being a “significant number” of personnel involved in EOD work, available on 10 minutes notice.

These officers were described as being on “permanent duty for the whole of their four month tour of duty”.

“It is very concerning that dissident republicans are becoming more frequent in the use of explosive devices and that these devices are increasingly more sophisticated,” he told the PA news agency.

“We have seen that such devices used as under car IED’s, anti-personnel ‘booby traps’ or as car bombs are capable of causing loss of life and destruction.

“The increasing number of call-outs for ATO teams in Northern Ireland highlights the continuing terrorist threat that is aimed at undermining peace and creating political instability.

“The Government must continue to provide the necessary resources and expertise for the police and Armed Forces in Northern Ireland to ensure this threat is dealt with robustly and our fragile peace is protected.”