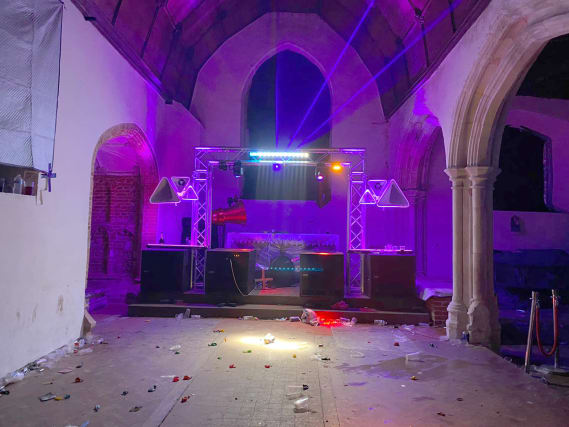 Police are trying to identify the “reckless” organiser of an unlicensed music event on New Year’s Eve during in which hundreds of revellers trashed a 500-year-old church in Essex.

Members of the conservation group that supports All Saints Church in East Horndon – a Grade II-listed building – said they are “devastated” by the damage caused and estimate repairs could cost more than £1,000.

Officers had objects thrown at them and were threatened as they dealt with the incident at the disused church, which led to three people being arrested on suspicion of drugs and public order offences.

Another new year celebration which had to be shut down saw police break up a crowd that had gathered at an industrial building in Wates Way, Brentwood.

Two people were arrested on suspicion of drink-driving and for failing to provide details.

Officers are trying to track down the organisers of both events, and chief inspector Richard Melton said they would receive the maximum penalty for these “blatant breaches” of coronavirus regulations.

A woman who held a house party in Bury Road, Sewardstonebury, for around 100 people on the same night has been fined £10,000.

Penalty notices were issued to 27 people who attended.

Music equipment was seized from all three sites where a total of 37 fixed penalty notices were handed out.

Chief inspector Melton said: “It is the reckless minority of people who organise and attend unauthorised events of this kind that risk spreading Covid-19 and jeopardising the efforts of the majority of people who are doing the right thing.

“Tragically there are people dying or becoming seriously ill because of this awful virus and we all have a responsibility for doing all we can to protect each other.”

Arrests made at the church included a 27-year-old man from Harlow, on suspicion of possession with intent to supply Class A drugs and a public order offence.

He has been released under investigation while inquiries continue and was given a fixed penalty notice for breaching coronavirus regulations.

A 22-year-old man from Harlow was released without charge for an alleged public order offence and given a conditional caution for possession of cannabis.

He will be given a fixed penalty notice for breaching coronavirus regulations.

A 35-year-old man from Southwark, who was arrested on suspicion of possession of drugs, was given a community resolution for possession of cannabis.