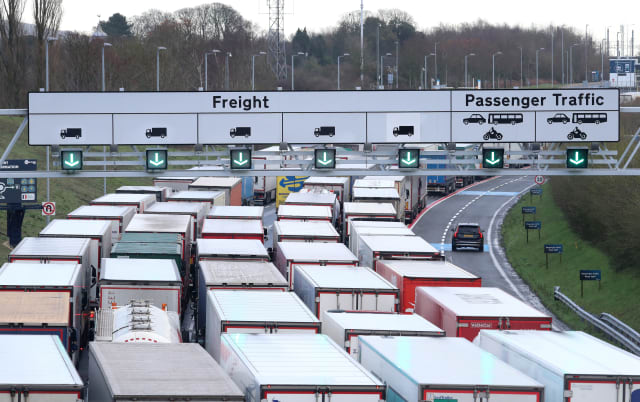 More than 20 new Covid-19 testing centres for hauliers heading to France are being set up in the next few days, Transport Secretary Grant Shapps said.

Mr Shapps revealed that 10 of the sites would open on Saturday, with a further 10 on Sunday, and more being added during the week.

The Government is also offering help to firms that wish to set up a testing location at their own premises.

Testing kits will be made available to companies free of charge under the initiative.

The move comes after restrictions were put in place on hauliers by the French government following the identification of a new strain of coronavirus in the UK.

Drivers wishing to enter France from Britain must show proof of a negative Covid-19 test taken in the previous 72 hours.

HGVs using Dover and Eurotunnel will get fast-tracked past queues if they get tested before arriving in Kent, the Government said, in a bid to reduce delays.

Military personnel will be at some of the test sites to help with the operation.

Mr Shapps said: “As a result of the heroic efforts of hundreds of military and civilian personnel who have worked hard over the past 10 days, we have made incredible progress in clearing the queues of drivers left stranded as a result of the French government’s actions.

“If we are to keep traffic flowing in Kent, it is essential drivers are tested before they travel down to the area and that they have a Kent Access Permit before heading to the border, and these new testing centres both at service stations and inside businesses will help reduce delays.”

Armed forces minister James Heappey said: “The armed forces are once again demonstrating their flexibility, redeploying to new testing sites to ensure quicker access and minimal disruption on the approaches to Dover and the Eurotunnel.”

Staff at the testing centres will also be able to provide hauliers with guidance on new border procedures in place since Britain exited the Brexit transition period on New Year’s Eve, the Government said.