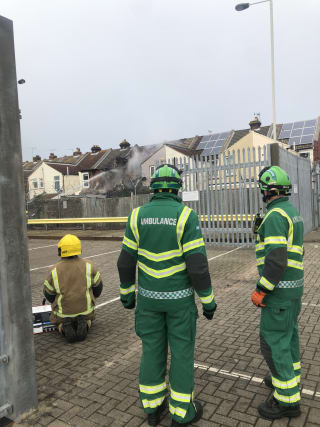 People have been evacuated from their homes on New Year’s Day after a house explosion in Portsmouth.

Extensive damage appears to have been caused to the back of a property near the Hampshire city’s waterfront.

Smoke could be seen coming from a large hole in the terraced house while firefighters continued to hose water on it.

Paramedics treated one person for minor injuries while two others were assessed as a precaution and discharged at the scene.

Nearby residents had to be evacuated following the explosion and fire, Hampshire Fire and Rescue Service said.

Fire crews from several stations across the county were brought in to tackle the blaze in Whale Island Way, which spread to a neighbouring property.

Members of the public were asked to avoid the area while emergency services responded.

A spokesperson for the fire service said on Friday afternoon: “The fire on Whale Island Way is now out. Firefighters will remain in attendance for some time damping down any hotspots.”