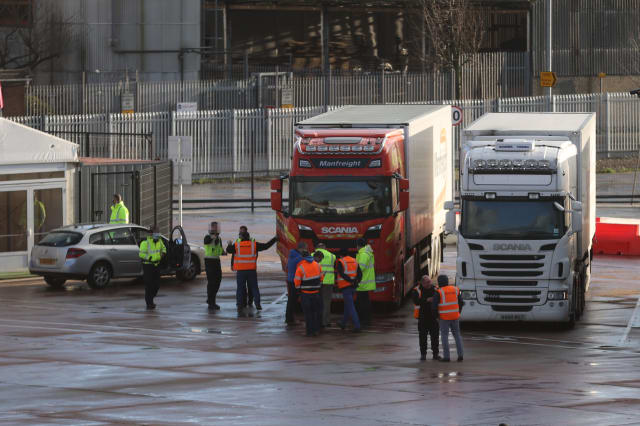 There was little sign of disruption at the border as freight travelled to France and Ireland on a quiet bank holiday after the new arrangements came in at 11pm on New Year’s Eve.

But, according to Logistics UK, close to half the lorries entering Belfast on the first ferry of the day from Great Britain on Friday were called in for inspection as part of new Brexit rules, with one truck stopped in the port for at least three hours as “teething problems” arose.

The Prime Minister said that leaving the single market and customs union meant the UK has “taken back control of our money, our laws and our waters”.

Lower trade volumes on the New Year’s Day bank holiday meant there was little disruption from the additional red tape that now applies on exports to the EU.

The Eurotunnel and the Port of Dover both told the PA news agency that services were running smoothly.

Four truck drivers were turned away by Eurotunnel but all as a result of failing to produce coronavirus test certificates, rather than falling foul of new customs rules.

Calais also reported calm but the region’s customs director Jean Marc Thillier warned the arrangements would face a “trial by fire” when traffic flows increase after the holiday weekend.

Mr Johnson, writing in the Daily Telegraph, said the “great new deal” with the EU secured on Christmas Eve honours the “most basic promises” of the 2016 referendum and meant the UK has “taken back control of our money, our laws and our waters”.

The EU had provided the UK with a “safe European home” during the 1970s, but the country has now “changed out of all recognition” with global perspectives, he said.

In a sign that the UK will break away from the EU rules it inherited, Mr Johnson said: “We need the Brexit-given chance to turbocharge those sectors in which we excel, to do things differently and to do them better.”

Ireland’s foreign minister, Simon Coveney, said the change in trading arrangements with the UK will inevitably cause disruption.

He told BBC Radio 4’s Today programme: “We’re now going to see the 80 billion euro (£71.2 billion) worth of trade across the Irish Sea between Britain and Ireland disrupted by an awful lot more checks and declarations, and bureaucracy and paperwork, and cost and delay.”

Ferry operator Stena Line said six freight loads destined for Ireland had been turned away at Holyhead due to incorrect paperwork.

Seamus Leheny, policy manager at Logistics UK, told BBC Radio 4’s PM there had been a new inspection regime to get used to for the first arrivals into Belfast on Friday afternoon.

He said: “There were only 15 lorries on that particular boat. However, six of the lorries were selected to go for inspection at the border control post at Belfast harbour.

“I know that at least one of those lorries is still detained three hours later, so already we’re seeing some consequences of this.

Former minister David Jones, deputy chairman of the European Research Group (ERG) of Brexiteer Tories, said “a border in the Irish Sea was something that we did not expect, nor did we approve of”.

He told the BBC that while “it does amount to a barrier”, the UK Government had “done a great deal to mitigate the problem, but I think it is going to take some time before the new arrangements bed in”.

The Northern Ireland Protocol means Northern Ireland remains in the EU single market for goods and will apply EU customs rules at its ports, even though the region is still part of the UK customs territory.

– Nicola Sturgeon said the EU should be ready to welcome an independent Scotland back into the bloc. The First Minister said: “Scotland will be back soon, Europe. Keep the light on.”

– French president Emmanuel Macron used his new year’s message to say that while the UK remains a “friend and ally”, Brexit was born of a European malaise and “many lies and false promises”.

– Chancellor Rishi Sunak abolished the “tampon tax”, removing VAT on sanitary products, something which was not possible under EU rules.

Under the new arrangements, freedom of movement rights end and, while UK citizens can still travel for work or pleasure, there are different rules.

Passports must be valid for more than six months, visas or permits may be needed for long stays while pets need a health certificate.

The automatic right to live and work in the EU also ceases, and the UK will no longer take part in the Erasmus student exchange programme.

Hauliers face new rules and lorry drivers heading for the Continent must have a Kent Access Permit before entering the county in an effort to curb tailbacks on cross-Channel routes.

The Department for Transport (DfT) said traffic management process had kept pace with demand on Friday, with 882 journeys registered for a Kent Access Permit by 8am.

As of midday, there were 21 lorries at Manston Airport lorry park and none involved in the queue system at Manston known as Operation Brock, the DfT said.

Big Ben chimed at 11pm on New Year’s Eve, when the Prime Minister is understood to have marked the occasion with his family in Downing Street.