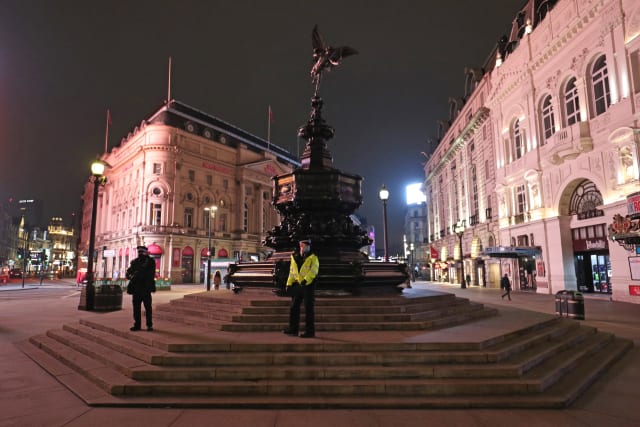 Police officers on the beat had little respite from the usual chaos of New Year’s Eve in England’s biggest cities despite most of the country being under the highest level of Covid-19 restrictions.

One Metropolitan Police officer working in east London joked: “When it comes to New Year’s Eve, it’s always like the gates of hell opening. It’s apocalyptic.”

He added: “If you think of anything and everything that could happen, it happens on New Year’s Eve.”

Teams in the east London area were called to multiple road traffic collisions after revellers decided to drive rather than risk being caught out and about on public transport or in a taxi.

“Drunk drive road traffic accidents took up a big portion of our time,” the officer said.

But he said the force had noticed a dip in bar and street fights.

“It is par for the course for New Year’s Eve to be very, very, busy,” he said.

In all, the Met were called to 58 unlicensed music events and parties across London and issued 217 fixed penalty notices (FPNs), with a further five people reported to magistrates for consideration for a £10,000 fine.

Incidents included a large event in the Royal Docks in the borough of Newham.

Despite a total of 44 million people – 78% of the population of England – being under the toughest Tier 4 measures, it was still a manic night for many police forces.

In Essex, officers dished out more than £18,000 in fines to organisers of unlicensed music events, reporting that hundreds of people had turned up in breach of lockdown rules.

Three people were arrested on suspicion of setting up a ticketed rave – complete with bars, DJ decks and Portaloos – in a 500-year-old, Grade II* listed church in Horndon, causing more than £1,000 of damage.

Astrid Gillespie, 48, a volunteer for the Friends of All Saints Church conservation group, said she was “devastated” by the damage caused to the church and church yard.

She told the PA news agency: “I love the place, it’s such a beautiful church, and to find out it’s been damaged is devastating, I’m just trying to get my head around it.”

Assistant Chief Constable Andy Prophet thanked all those who had stayed home.

But he added: “Unfortunately, there were others who decided to blatantly flout the coronavirus rules and regulations and, ultimately, they decided that partying was more important than protecting other people.”

Meanwhile, Thames Valley Police has launched a murder investigation after an 18-year-old man and a 49-year-old man were stabbed just before 3am at an address in Stantonbury, Milton Keynes.

Both were rushed to hospital, where the 18-year-old later died, while the 49-year-old was said to be in a serious but stable condition.

A 21-year-old man has been arrested on suspicion of murder and is in police custody.

– Sussex Police issued a total of 81 FPNs – including five to a group who claimed they had driven all the way from London to Brighton to collect a takeaway.

– Lancashire Constabulary had a “steady stream” of incidents, including breaking up a house party of 80 people in Hyndburn.

– Merseyside Police put in place a dispersal zone in Liverpool city centre between 7.30pm on New Year’s Eve and midday on January 1 after someone tried to organise an illegal street party on social media.

– Northamptonshire Police issued 150 fixed penalty notices for lockdown breaches, including an event of 50 people in the village of Cranford, near Kettering.

West Midlands Police were also battling lockdown fatigue as 2020 drew to a close, according to Chief Constable Dave Thompson.

Mr Thompson tweeted: “I am afraid some shocking Covid breaches with very large house parties. Well dealt with by the team. Always a pleasure to spend time with such professional officers.”

One incident saw a police car in Coventry almost certainly written off in the early hours when it was rammed seven times by a suspected drugged-up van driver while two officers were inside.

The driver tried to make off on foot but was cornered and arrested a short distance from the scene.

Other forces got off more lightly, with Wiltshire Police reporting “a quiet and peaceful new year” – issuing around 20 formal warnings for house parties to disperse.