Williamson ‘absolutely confident’ of no further delays to reopening of schools 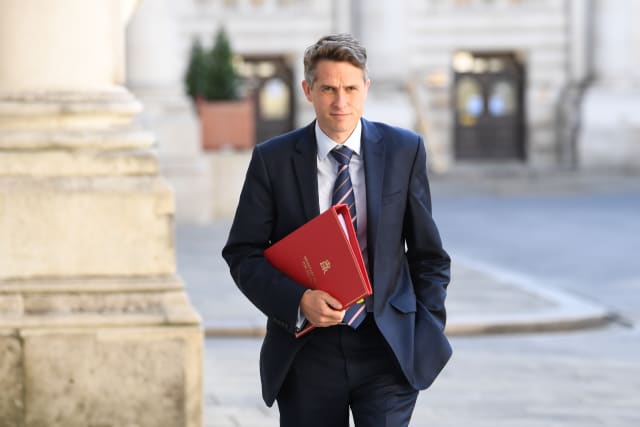 Education Secretary Gavin Williamson has said he is “absolutely confident” there will be no further delays to school reopenings, after soaring coronavirus case rates in December forced the Government into a U-turn in pushing back the start of term for millions of pupils.

He moved to reassure teaching staff, pupils and parents the newly rescheduled staggered return dates for England will stay in place, despite concerns about safety and transmission rates among younger people.

But teachers said they remain unconvinced about the plans, and accused the Government of living in a “parallel universe”.

The Government announced on Wednesday that primary school pupils in some of the areas hardest hit by Covid-19 will not return to their desks as planned next week, with students in exam years returning to secondary schools a week later than planned, from January 11. Other secondary and college students will go back full-time on January 18.

The vast majority of primary schools will return on January 4 as planned.

Mr Williamson said he does not anticipate further delays, and he told BBC Radio 4’s Today programme on Thursday: “You’re going to see over 85% of primary schools returning on Monday morning, you’re going to be seeing exam cohorts going back right across the country on January 11.”

Asked if he can guarantee that, Mr Williamson said: “We are absolutely confident that is what is going to happen.”

He said £78 million of additional funding, personal protective equipment (PPE) and support from the military will help get mass testing programmes set up in education settings.

“There’s absolutely no reason that schools won’t be ready,” he added.

But his confidence is not shared by those on the educational frontline, unions said.

Geoff Barton, general secretary of the Association of School and College Leaders, said: “The Government seems to be in a parallel universe on the issue of setting up mass Covid testing in schools and colleges.

“It is asking them to recruit and train large numbers of staff, and set up testing centres, in an incredibly short timeframe.

“The support it has announced is nowhere near being sufficient.

“Ministers need to remember that schools and colleges are educational institutions, not medical facilities, and it has to support this testing programme properly.”

Patrick Roach, general secretary of the NASUWT union, said a reliance on military support is “not a credible way to deliver a robust and reliable programme of mass testing” in schools.

He said: “The Government is in danger of misleading parents and the public into believing that it has a system of mass testing, whilst it is putting the responsibility on to thousands of individual schools and colleges to develop the infrastructure and to recruit an army of willing volunteers who will also need to be vetted, trained and supervised to deliver a competent and consistent programme of testing.”

Kevin Courtney, joint general secretary of the NEU union, said: “Serious questions have to be asked about the Government’s plans for lateral flow testing in secondary schools and the readiness of schools and colleges to be able to get a system in place by January 11 to administer them.

“We do not think it likely that these tests alone can make our schools Covid-secure, nor protect the communities they serve.”

Wednesday’s U-turn on school reopenings was the latest made by Mr Williamson since the start of the pandemic.

The Government also reversed its decision not to extend the children’s food voucher scheme into the summer holidays following a high-profile campaign by footballer Marcus Rashford, it went back on a commitment that face coverings would not be necessary in schools, and it delayed primaries’ return dates after the first national lockdown.

Similar school reopening delays have been announced elsewhere across the UK.

In Northern Ireland, primary and secondary school pupils will be taught remotely for a week from January 4, before returning to the classroom, although pupils in years 8 to 11 will continue with online learning until the end of January.

In Scotland, the majority of pupils will be taught remotely from January 11, with face-to-face lessons from the following week.

But in Wales, Health Minister Vaughan Gething told the Welsh Parliament on Wednesday: “We still expect to return as planned, with a phased return to schools, together with the serial testing that we will be introducing.”

Meanwhile, Conservative MP Robert Halfon, chairman of the Commons Education Select Committee, has renewed calls for teaching staff to be made a priority for vaccinations against Covid-19.