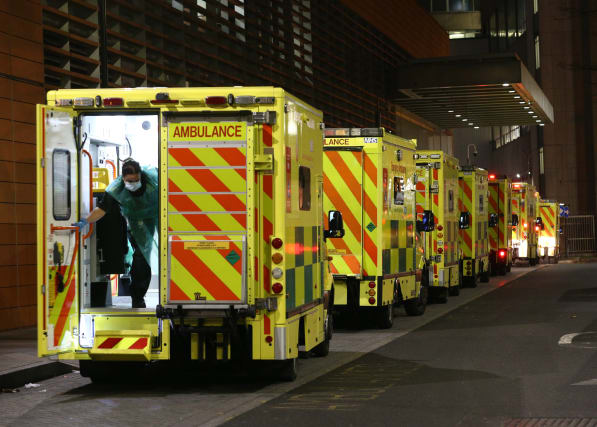 More than a million people have now received their first coronavirus vaccination but the UK’s chief medical officers have urged doctors to back “decisive action” to combat the “pandemic which is running rampant in our communities”.

A joint statement from England’s Professor Chris Whitty and the CMOs of Scotland, Wales and Northern Ireland said the public would “understand” and “thank” them for a plan to give first jabs as a priority, delaying the follow up vaccination for others.

New Year’s Eve brought a new record high of 55,892 daily lab-confirmed cases in the UK – the highest since mass testing began in late May – with a further 964 deaths within 28 days of a positive test.

NHS Providers deputy chief executive Saffron Cordery said pressure on hospitals was “intensifying” and warned: “We are in for a very difficult new year.”

The deployment of the newly approved Oxford/AstraZeneca vaccine will begin on Monday, almost a month after the roll out of the Pfizer/BioNTech vaccine, but second doses of either will now take place within 12 weeks rather than 21 days as initially planned.

In response to criticism from GP leaders about the change of plan, the joint statement said while it was “difficult” to reschedule second jabs, it was better to offer more people the “substantial protection” given by the first dose within two to three weeks, as the UK waits for more vaccine stocks to become available.

Meanwhile, GPs are being offered £10 for every care home resident they vaccinate in a drive by NHS England to reach the majority of those deemed top priority by the end of January.

A total of 44 million people, or 78% of the population of England, are now living under the toughest Tier 4 measures and it emerged on Thursday that scientists advising the Government said in a meeting on December 22 it was “highly unlikely” measures comparable to the November circuit break would bring the R rate below 1.

Members of the Scientific Advisory Group for Emergencies (Sage) blamed the new, more virulent strain, adding: “R would be lower with schools closed, with closure of secondary schools likely to have a greater effect than closure of primary schools.”

Universities are being asked to reduce the number of students returning to campus from the beginning of the new term while those who do return should be offered two rapid coronavirus tests.

Figures published on New Year’s Eve show just less than a third of acute trusts have more Covid-19 patients than at any point since the pandemic began, with union leaders warning about staff burnout, soaring sickness levels and “intolerable” pressures.

The situation is dire in Northern Ireland, where bed occupancy in the health service is now at 100% with ambulance crews braced for long delays.

Just six beds were empty in Northern Ireland as of Wednesday night, according to official figures.

All of mainland Scotland and Skye remained under the highest curbs as 2021 began.

Police forces and public health officials across the UK pleaded with people to celebrate the new year with their own household.

Professor Hugh Montgomery, an intensive care doctor at the Whittington Hospital, said people who mixed unnecessarily would have “blood on their hands”.

He told BBC Radio Five Live: “They won’t know they’ve killed people but they have.”