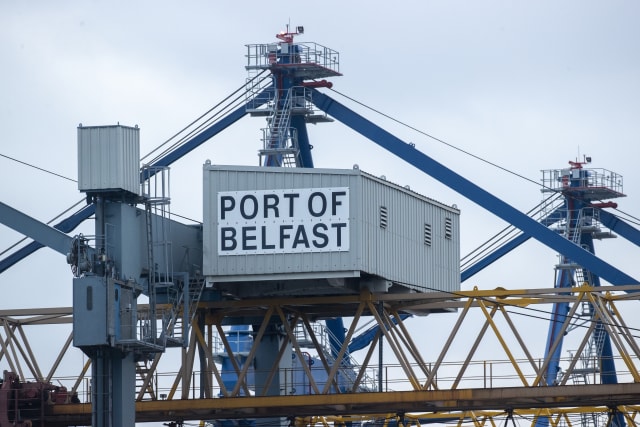 The Northern Ireland Protocol governing trade between Great Britain and the region comes into effect when the Brexit transition period ends at 11pm on New Year’s Eve.

Here are answers to some of the main questions about the protocol, its origins and how it will work.

– Why was the protocol needed?

It was the resolution to the main sticking point in the Brexit divorce talks – the Irish border. In order to avoid disrupting cross-border trade and a return of checkpoints along the politically sensitive frontier, the EU and UK essentially agreed to move new regulatory and customs processes to the Irish Sea. That means the checks are now focused on trade between Great Britain and Northern Ireland.

– Is this different to the trade deal?

– What is in the protocol?

Under the terms of the protocol, Northern Ireland remains in the EU single market for goods. Northern Ireland will also apply EU customs rules at its ports, even though the region is still part of the UK customs territory.

– What will single market rules mean for trade from Great Britain?

As part of the single market, Northern Ireland will have to adhere to strict EU regulations on food standards and plant and animal health. This will result in additional SPS (sanitary and phytosanitary) checks on certain produce entering the region from Great Britain.

The island of Ireland has long been treated as a single unit in respect of the movement of livestock, so checks on live animals arriving from GB already took place at Larne port. The number of checks will increase significantly as there is now a requirement to check agri-food products.

Suppliers exporting food to Northern Ireland will have to pay for vets to complete Export Health Certificates in Great Britain and a proportion of lorries will be selected for physical checks on arrival in Northern Ireland. The vast bulk of GB goods arrive at either Larne or Belfast ports, though some consignments will land at Warrenpoint and Foyle.

Currently 16 ferries arrive in Northern Ireland from GB every day. Between them they usually carry 175 roll on/roll off lorries and 275 unaccompanied freight units. The latter units do not usually transport agri-food products, so the focus of the SPS checks will be on the roll on/roll off lorries. While all hauliers will have to complete required online processes to alert the authorities of produce being shipped to NI, it is anticipated that around 20-25% of the lorries will be selected for physical inspection on arrival.

Permanent “Point of Entry” checking facilities are due to be completed by the middle of 2021. In the interim, temporary structures will be used from January 1.

The Government has established a Movement Assistance Scheme to help traders comply with the new rules.

– Does everything come into effect on January 1?

While the protocol starts operating at 11pm on December 31, the EU and UK have agreed to two grace periods to give traders time to adjust. Supermarkets and other food retailers have been given three months to adjust to the requirements of the new SPS checks. From April 1, they will need to produce Export Health Certificates for every different animal-based food product they ship to Northern Ireland.

For the first three months only one all-encompassing certificate will be required per consignment of goods. These products will also need to be labelled as destined for consumption in Northern Ireland. Lorry doors will also need to be sealed on departure with an inventory of contents listed on it.

Some products are to be prohibited from entering Northern Ireland at all under single market rules. Sausages and other chilled meats, which are on that banned list, have been granted a specific six-month grace period to enable their import from GB to continue until June, using temporary Export Health Certificates.

At the end of the six months, those products will no longer be permitted into Northern Ireland, unless the UK and EU agree a longer term solution in the interim. There is no such grace period for other banned products, including seed potatoes, and their import will be prohibited from January 1.

– And what about customs?

This is the part of the protocol affected by the wider trade deal. The EU had been concerned about traders using Northern Ireland as a backdoor to avoid paying tariffs on goods entering the bloc. Brussels was wary that goods could have been moved from GB to NI and then across the frictionless Irish border without being subjected to customs controls.

The protocol addressed this by requiring Northern Ireland to apply the EU customs code at its ports. Under this measure, goods deemed “at risk” of onward transportation into the EU via the Irish border would have been liable to pay tariffs upon entry into Northern Ireland from GB. This would have been collected by UK authorities. If it could have then been established that the goods stayed in Northern Ireland, the traders would be have eligible for a rebate.

Much of the controversy around the implementation of the protocol focused on what proportion of Irish Sea trade would be deemed “at risk” and therefore be hit with added bureaucracy and up-front costs. The introduction of a form of trusted trader scheme, agreed by the UK/EU joint committee at the start of December, was already set to dramatically reduce the number of businesses liable for tariffs.

However, the zero tariff/zero quota trade deal has since gone a long way to resolving the issue entirely, as GB goods moving into the EU will no longer have to pay tariffs.

Goods that originate outside the UK that are subsequently moved from GB to the EU would still be potentially liable for tariffs, so the “at risk” aspect of the protocol is not completely redundant, but it will undoubtedly affect far fewer businesses.

While the prospect of having to stump up tariffs has receded, traders moving goods from GB to NI will still face added paperwork and processes from January 1. The Government has set up a Trader Support Scheme (TSS) to assist businesses in completing the required customs declarations.

There are differing estimates on how many declarations will be anticipated each year on GB to NI trade. HMRC has estimated around 11 million but the TSS put the figure at around 30 million.

New customs administration is not just limited to freight. There had been a lot of uncertainty on whether declarations would be required for commercial goods being sent by GB-based online retailers directly to Northern Ireland consumers.

Internet sellers and dispatch companies had warned of potential disruption, with some having suspended services to Northern Ireland until clarity was provided.

On Thursday morning, the Government published guidance on the issue and announced a three-month grace period on the introduction of new requirements for most parcels. From January 1, the only parcels requiring declarations will be those containing goods valued at more than £135 sent by GB businesses to NI businesses. Those businesses will also have three months to submit those declarations.

– What about NI to GB trade?

This will remain largely unaffected. There had been the prospect of goods moving from Northern Ireland to GB requiring export declarations. However, the joint committee agreement on the operation of the protocol has all but eliminated this requirement. Such declarations will now only be needed in very limited circumstances, such as for trade in endangered species and conflict diamonds.

– Are there potential advantages to the protocol to NI businesses?

Notwithstanding the added red tape and cost of bringing products into Northern Ireland from GB, the region will find itself in a unique regulatory position in the new EU/UK trading landscape. NI businesses will have unfettered access into the UK internal market while at the same time remaining in the EU single market for goods – so they will face fewer regulatory hurdles to export to both the EU and GB markets. In theory, Northern Ireland could be a good place for exporters to base themselves in the post-Brexit era.

– But there are political concerns, right?

Yes. Unionists in Northern Ireland are very unhappy about the protocol. They believe it creates an economic barrier between Northern Ireland and the rest of the UK and has the potential to undermine the constitutional integrity of the Union.

– Will the EU be monitoring the application of the protocol?

Yes. EU officials do have the right to accompany Northern Ireland officials as they implement the new processes and checks. The prospect of the EU retaining an office in Northern Ireland was strongly opposed by the UK. A number of officials will still be based in the region (essentially hot-desking in Stormont buildings) to oversee the trading arrangements.

– Is the protocol permanent?

No. The Northern Ireland Assembly will vote periodically on whether to continue with the arrangements. The first vote will be after four years. Stormont decisions on contentious issues usually require both a majority of unionists and a majority of nationalists to support them.

However, it is envisaged that the vote on extending the protocol will be conducted on a straight majority basis. While a majority of the MLAs currently support the protocol, it is worth highlighting that there will be an Assembly election in 2022 that could potentially change the complexion of the chamber.

If a majority does vote to extend the operation of the protocol then the next vote would be held after another four years. However, in the unlikely event that there was sufficient cross-community support for an extension, MLAs would not vote again on the protocol for a further eight years.