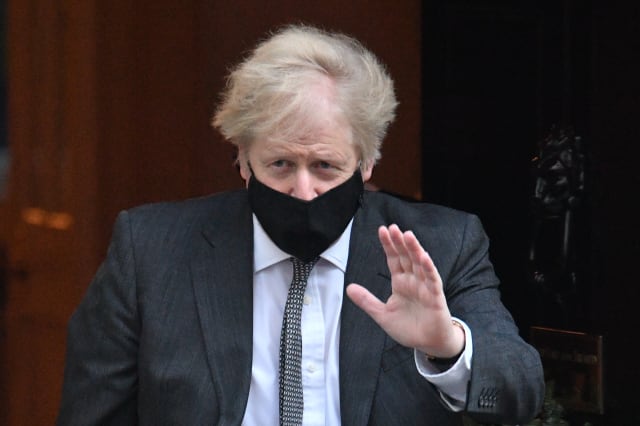 Prime Minister Boris Johnson said the UK has "taken back control of our money, our laws and our waters" after the Brexit transition period with the European Union came to an end.

The UK is free to pursue independent trade policies for the first time in more than four decades after membership of the single market and customs union expired at 11pm on Thursday – four and a half years after the referendum which sought to settle the issue but sparked political turmoil.

Mr Johnson said the EU had provided the UK with a "safe European home" during the 1970s, but the country has now "changed out of all recognition" with global perspectives.

He said the UK was "free to do things differently, and if necessary better, than our friends in the EU" in 2021 in a video message to mark New Year.

His Christmas Eve deal with Brussels allows for the continuation of tariff-free trade with the EU single market – though businesses and individuals will have to follow new rules.

The UK has reached several agreements with non-EU countries – such as Japan – to ensure continuity of trading arrangements for British companies from January 1.

Mr Johnson, writing in the Daily Telegraph, said the "great new deal" honoured the "most basic promises" of the 2016 referendum, and added that the UK has "taken back control of our money, our laws and our waters".

"And yet it is also the essence of this treaty that it provides certainty for UK business and industry, because it means that we can continue to trade freely – with zero tariffs and zero quotas – with the EU."

Under the new arrangements, freedom of movement rights end and while UK citizens can still travel for work or pleasure, there are different rules.

Passports must be valid for more than six months, visas or permits may be needed for long stays, pets need a health certificate and drivers need extra documents.

The automatic right to live and work in the EU also ceases, and the UK will no longer take part in the Erasmus student exchange programme.

Hauliers face new rules and lorry drivers heading for the Port of Dover must have a Kent Access Permit before entering the county.

Travel to Ireland does not change, but the Northern Ireland Protocol means Northern Ireland remains in the EU single market for goods and will apply EU customs rules at its ports, even though the region is still part of the UK customs territory.

Gibraltar, whose sovereignty is disputed by Spain and Britain, remains subject to the rules of the free-travel Schengen area, keeping the border with Spain open.

Government officials insisted the necessary border systems and infrastructure in the UK are in place.

Big Ben chimed at 11pm, when the Prime Minister is understood to have marked the occasion with his family in Downing Street.

Celebrations were muted by the coronavirus pandemic but Eurosceptic MPs, once derided as fringe eccentrics on the margins of the Conservative Party, expressed their delight.

Sir Bill Cash said it was a "victory for democracy and sovereignty" while Sir John Redwood said he looked forward to using the "new freedoms and opportunities now open to global Britain".

Peter Bone said Eurosceptics had gone from being viewed as "strange" to getting the "support of people to defeat the establishment".

Mark Francois, chairman of the European Research Group of Tory Brexiteers, said waving goodbye to 2020 and the EU was a "marvellous example of a buy one, get one free".

Former Ukip leader Nigel Farage, who played a key role in the 2016 referendum, told the PA news agency: "Yes, we spare a thought for Northern Ireland and our fishermen, but this is a moment to celebrate 2021 as an independent United Kingdom. It's a shame the pubs aren't open."

The UK's chief negotiation Lord Frost said the UK has a "great future before us" with the chance to "build a better country for us all".

But Scottish First Minister Nicola Sturgeon, a vocal critic of Brexit, said: "Scotland will be back soon, Europe. Keep the light on."