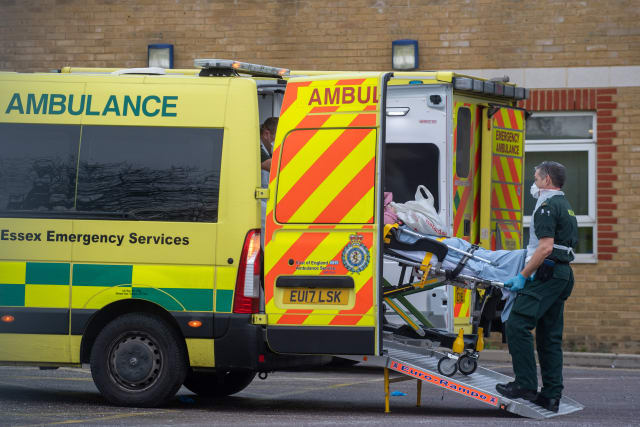 People are being warned not to add “fuel to the fire” by mixing in groups, as almost half of all major hospital trusts in England deal with more Covid-19 patients than at the peak of the first wave of the virus.

Figures published on New Year’s Eve – as health staff and the Government urge people to ring in 2021 within their own household at home – also show just under a third of acute trusts have more Covid-19 patients than at any point since the pandemic began.

Rates of infection are rising in all regions of the country, according to the latest data from Public Health England, and the 55,892 daily lab-confirmed cases in the UK on Thursday represent the latest record high since mass testing began in late May.

Professor Hugh Montgomery warned that people who do not wear masks and continue to mix unnecessarily have “blood on their hands”.

The intensive care doctor at Whittington hospital in north London said anyone who thinks it is acceptable to have “one more night out” is spreading the virus.

He told BBC Radio Five Live: “Anyone who’s listening to this who doesn’t wear their mask and behaves like this – they have blood on their hands, they are spreading this virus. Other people will spread it and people will die.

“They won’t know they’ve killed people but they have.”

The Government said a further 964 people had died within 28 days of testing positive for Covid-19 as of Thursday, bringing the UK total to 73,512.

Urging people to stick to the rules in a bid to stop the spread, she said: “The Christmas week saw a worrying rise in cases across every region of the country, particularly among adults in their 20s and 30s.

“We must not now add further fuel to the fire, as meeting in close and large groups this New Year’s Eve risks further transmission.”

Prof Montgomery said the consequences of “bad behaviour” over Christmas will not be seen in intensive care units until next week, and the results of any similar actions by people on New Year’s Eve will be felt in hospitals about 10 days later.

Figures published on the Government’s coronavirus dashboard on Thursday showed that some 64 out of 140 acute NHS trusts were recording a higher number of Covid-19 patients at 8am on December 30 than at any point between mid-March and the end of May – covering the first wave period.

The data also shows that 42 of the 140 acute trusts had more Covid-19 patients on December 30 than at any point since the pandemic began.

New restrictions which came into effect at midnight mean a total of 44 million people, or 78% of the population of England, are now living under the toughest Tier 4 measures.

Defence Secretary Ben Wallace said the military is standing by to staff Nightingale hospitals if the NHS exceeds its capacity of critical care beds.

A spokesman for the NHS said the Nightingale sites across England “are being readied to admit patients once again should they be needed”, and that hospitals in London are coming under significant pressure from high infection rates.

He said: “In anticipation of pressures rising from the spread of the new variant infection, NHS London were asked to ensure the London Nightingale was reactivated and ready to admit patients as needed, and that process is under way.”

“If it starts to tip over there, then of course you’ll see those Nightingales being more active and, yes, we have a number of medical staff.”

He said the Army currently has 5,000 personnel deployed in the Covid-19 response.

It is understood a request for help in Essex – over fears about critical care and bed capacity, staff sickness and the ability to discharge patients quickly into safe environments – has been received by the Ministry of Defence but that alternative options with local health partners are still being considered.

Union leaders are warning that health workers face burnout, soaring sickness levels and “intolerable” pressures because of the ongoing crisis.

NHS Providers deputy chief executive Saffron Cordery said pressure on hospitals is “intensifying” and warned: “We are in for a very difficult new year.”

Deployment of the newly approved Oxford/AstraZeneca vaccine is due to begin on Monday.

Mr Wallace said up to 250 teams of combat medics could be made available to help deliver the rollout across the country.

Infection rates in England remain highest among 30 to 39-year-olds, Public Health England said, with rates falling slightly among five to nine-year-olds, 10 to 19-year-olds and people aged 80 and over.

The reopening of secondary schools in England has been delayed until later in January, and in some of the areas hardest hit by Covid-19, primary school pupils will also not return as planned next week.

Universities are being asked to reduce the number of students returning to campus from the beginning of next month, and those who do return should be offered two rapid coronavirus tests.

A total of 944,539 people across the UK had received a Covid-19 vaccine dose by December 27, the Department of Health said.

Meanwhile, GPs are being offered £10 for every care home resident they vaccinate in a drive by NHS England to reach the majority of those deemed top priority by the end of January.

GP leaders have criticised a decision to delay giving the second dose of Covid-19 vaccines – following the announcement of a new dosing regimen – saying the move will cause huge problems for thousands of partially vaccinated elderly and vulnerable people.