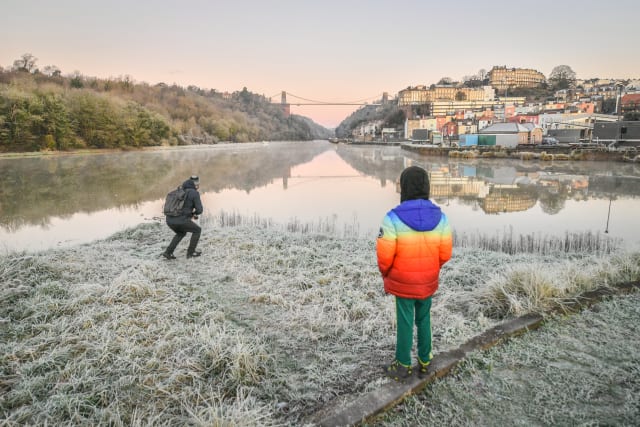 The final day of 2020 brought bitterly cold conditions for much of the UK and more snow – with a low of minus 7.5C (18.5F) recorded in Topcliffe, near Thirsk in North Yorkshire.

Met Office yellow warnings for snow and ice in parts of Northern Ireland, most of Scotland and parts of North Wales and northern England remained in place overnight, while sub-zero temperatures caused icy early-morning conditions along much of the south coast of England.

North Wales Police advised motorists to avoid all non-essential journeys as officers dealt with several collisions on the A55 amid dangerous conditions caused by snow and ice.

Many areas in the North West of England woke up to thick mist and a blanketing of snow after temperatures plunged to well below zero.

A yellow weather warning for snow and ice has been issued for the region by the Met Office, with snow still falling and more forecast.

Parts of Merseyside were already covered in snow, which fell in previous days but has yet to melt as temperatures stayed below freezing.

North West Motorway Police urged people to drive with care following a number of accidents, while Transport for Greater Manchester also warned people to expect delays and leave extra time for journeys if they are venturing out.

Meanwhile, the Police Service of Northern Ireland (PSNI) urged walkers to be prepared for the conditions after two groups had to be rescued from the Mourne Mountains in County Down on Wednesday.

The PSNI’s Air Support Unit tweeted to confirm that one group was located on Ben Crom and led to safety by mountain rescue volunteers, while another group was winched to safety.

The snow and ice weather warning remains in force for much of northern England as well as large parts of Scotland until 2pm on Thursday, while the separate snow and ice warning for northern Scotland and Northern Ireland expires at 11am.

An ice warning covering the southern tip of England remains in force until 11am, with the possibility of rapidly freezing surfaces after downpours.

Met Office forecaster Clare Nasir said: “New Year’s Eve will bear with it again the risk of rain, sleet and snow, another feature sliding down the country from northern Scotland.

“Particularly inland and over the hills we will see some snow.

“Many of us will see some brighter weather, with still a keen breeze keeping things very cold indeed, and again the risk of ice as we head into New Year’s Day, with again a wintry mix coming and going, and a fairly widespread frost.”

Wednesday saw the coldest night of the winter so far, with a low of minus 10.2C (13.6F) recorded in Dalwhinnie in the Scottish Highlands.