Millions under toughest restrictions as hospitals struggle with Covid patients 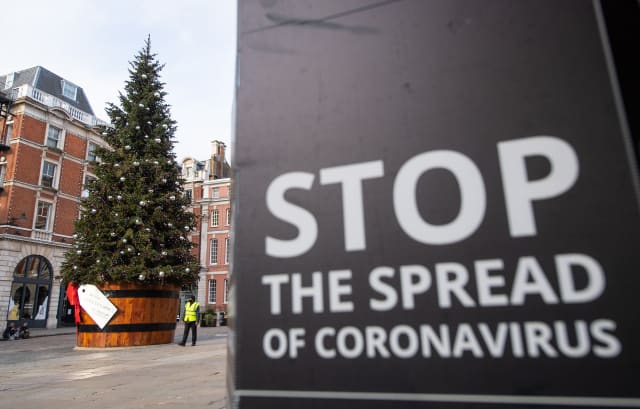 Millions of people across England are ending the year under the toughest coronavirus restrictions, as the virus continues to spread and hospitals struggle with high numbers of Covid-19 patients.

More than three quarters of the country’s population are being ordered to stay at home, as swathes of the country were plunged into Tier 4 overnight.

Another 22 million people in parts of the North East, North West, South West and Midlands have been placed under lockdown measures in a bid to control infections.

People were warned they must ring in the New Year by staying at home and not mixing, with NHS England’s national medical director Professor Stephen Powis saying: “Covid loves a crowd.”

Defence Secretary Ben Wallace said the military is standing by to staff Nightingale hospitals if the NHS exceeds its capacity of critical care beds.

Speaking to Times Radio, he said: “Of course we stand ready to help with Nightingales if the critical pressures go beyond the capacity of the existing NHS.

“If it starts to tip over there, then of course you’ll see those Nightingales being more active and, yes, we have a number of medical staff.”

He said the Army currently has 5,000 personnel deployed in the Covid-19 response.

It was disclosed on Wednesday that Buckinghamshire had followed Essex by declaring a major incident amid fears that rising numbers of Covid-19 patients could overwhelm health services.

Health chiefs said non-urgent surgery and outpatient appointments were being delayed, but serious operations, including for cancer, would go ahead.

The news about Buckinghamshire came after local authorities in Essex asked for help to increase hospital capacity, over fears about critical care and bed capacity, staff sickness and the ability to discharge patients quickly into safe environments.

Conservative MP Sir Bernard Jenkin requested armed forces assistance for Essex in the Commons on Wednesday, including for vaccine deployment and testing in schools, although the Ministry of Defence said on Thursday it had not yet received an official request for support.

Union leaders are warning of the danger that health workers face burnout, soaring sickness levels and “intolerable” pressures because of the ongoing  crisis.

Health employers were urged do all they can to find ways of maintaining staff levels at “swamped” hospitals, with Unison saying every option should be explored to avoid simply making healthcare workers do extra shifts, such as recruiting former NHS staff.

A day after the approval of the Oxford/AstraZeneca vaccine was announced, in what was hailed as a “game changer” moment, Mr Wallace said up to 250 teams of combat medics could be made available to help deliver the rollout across the country.

He told Times Radio: “ We’ve already put 133 (army medics) into the overall vaccine taskforce but I’ve also got plans for up to 250 teams of mobile, medically-trained personnel who could go out and administer the vaccine around the country.

“That would be over 100,000 a day they could potentially deliver if that is requested by the NHS – and we are planning to grow that if possible.”

The new restrictions mean a total of 44 million people, or 78% of the population of England, are now in Tier 4, where non-essential shops, as well as gyms, cinemas, casinos and hairdressers, have to stay shut.

People are also limited to meeting one other person from another household in an outdoor public space, and must not leave their Tier 4 area except for legally permitted reasons such as medical appointments.

Boris Johnson said the UK must redouble its efforts to fight coronavirus, and that “no-one regrets these measures more bitterly than I do” but insisted that “firm” action was needed to control the pandemic.

Another 981 people died within 28 days of testing positive for Covid-19 as of Wednesday, the highest daily figure reported since April 24, though there is likely to be a lag in reporting deaths over the Christmas period.

And a further 50,023 lab-confirmed cases of coronavirus in the UK were recorded as of 9am on Wednesday.

There were 55,226 daily new symptomatic cases of Covid-19 in the UK on average over the two weeks up to 26 December – not including care homes – according to the the Zoe Covid Symptom Study UK Infection Survey.

The survey figures, based on swab tests data from up to five days ago, suggest Wales, London and the south of England are still the main drivers of the high numbers of daily new cases in the UK, researchers said.

But Professor Tim Spector, lead scientist on the study and professor of genetic epidemiology at King’s College London, said children are showing the lowest increase in infection of any age group and that “closing schools is a bad idea and will unlikely have a major impact on new cases, but will have long-term consequences on children”.

The reopening of secondary schools in England is being delayed until later in January, and in some of the areas hardest hit by Covid-19, primary school pupils will also not return to their desks as planned next week.

Universities are being asked to reduce the number of students returning to campus from the beginning of next month, and those who do return should be offered two rapid coronavirus tests.

The British Medical Association (BMA) has warned that the NHS will “struggle to get patients in urgent need of care, the care they need” if the trajectory of rising infections continues.

Mr Johnson said the Government was “working as hard and as fast as we can” to get supplies of the newly-approved vaccine from Oxford University and AstraZeneca to people.

The Medicines and Healthcare products Regulatory Agency (MHRA) gave the jab the green light on Wednesday morning and 530,000 of doses are expected to be available for rollout from Monday.

Meanwhile GPs are being offered £10 for every care home resident they vaccinate in a drive by NHS England to reach the majority of those deemed top priority by the end of January.