Europe should ‘leave a light on for Scotland’ – SNP 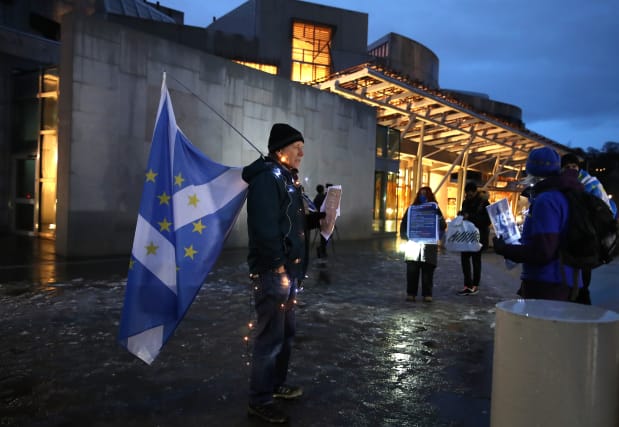 The SNP has said Europe should "leave a light on for Scotland" as the Brexit transition period comes to an end.

The party's Westminster leader Ian Blackford said Scotland would "be back" to rejoin the EU as an independent country.

However, the Conservatives accused the SNP-run Scottish Government of spreading "propaganda" about the Brexit deal on its official channels.

The Scottish Conservatives objected to a video on social media which they described as "one-sided Nationalist distortion".

Scotland will leave the European Union despite Holyrood refusing to give legislative consent for the Prime Minister's Brexit agreement.

MSPs voted by 92 to 30 to say the deal would "cause severe damage to Scotland's environmental, economic and social interests", following a debate on Wednesday.

The transition period formally comes to an end at 11pm on Thursday, meaning Scotland's trading relationship with EU countries will be governed by the new agreement.

On Thursday evening, Mr Blackford said: "I ask our European friends and neighbours to leave a light on for Scotland.

"Scotland will remain a European nation, we will continue to build strong links, and we will be back to take our place as an independent member of the EU."

A Scottish Government report released on Wednesday modelled that GDP would be 6.1% lower by 2030 compared to remaining a member of the EU.

He said: "This video is a work of shameless propaganda and it's incredible that a politically neutral civil service would think it is in any way appropriate.

"For taxpayers to be bankrolling a work of one-sided Nationalist distortion is not on.

"The government is supposed to represent everyone in Scotland."

Mr Ross accused the SNP of hypocrisy for refusing to back the Prime Minister's deal when it had opposed a no-deal Brexit.

Meanwhile, demonstrators gathered outside Holyrood on Thursday afternoon to protest against the end of the transition period.

Around 12 people took part in the socially distanced Yes for EU event.

Morag Williamson, from the group, said: "We are very sad and very angry at the same time.

"We don't want to leave the family of Europe – but we are being dragged out against our will.

"We want independence then we want to apply for accession to the EU as soon as possible."