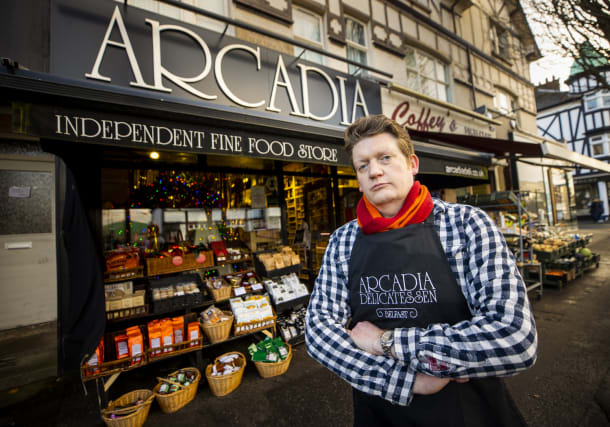 British cheeses may become a rarity on the shelves of Northern Ireland’s delicatessen stores unless a fresh deal is agreed, a business owner has said.

The Brexit Protocol will see Great Britain leave the EU customs union and single market while Northern Ireland continues to follow those rules.

This will mean export health certificates will be required for every different animal-based food product shipped from Great Britain to Northern Ireland.

Supermarkets and other food retailers have been given three months to adjust to the requirements of the new SPS checks.

However, Mark Brown, of Arcadia Delicatessen in Belfast, said he fears that, from April, he will no longer be able to offer as much choice for his customers.

He criticised a lack of information from the Government, saying most of what he knows he has learned from media.

“I don’t think anyone really knows how it is going to pan out,” he told the PA news agency.

“I hope business finds a way of sorting it out because, at the moment, after April, I probably won’t be having any English, Scottish or Welsh cheese.

“I have tried to seek out alternatives but of course the likes of Stilton is only made in Stilton in England. It just means we could end up with less diversity and less choice.

“The whole point of a small deli like mine is that we offer stuff that people cannot get elsewhere because I import it.

“I have been trying to contact suppliers in London but they aren’t answering the phone, which isn’t like them. I’m not sure if it’s the Northern Ireland number or that they are just so busy.

“I have stockpiled hard cheeses but soft cheeses are the problem initially.”

He said he also fears lorries being delayed.

“If a lorry gets stuck coming into Northern Ireland, the fresh foods may not be sellable by the time they get to me,” he said.

Michael Thomson makes his own cheese as well as buying in other varieties to sell as part of his business, Mike’s Fancy Cheeses.

He also criticised a lack of information from the Government.

“We buy a few English cheeses in, we had thought that because of the export health certificate that we just wouldn’t stock English cheeses but that might all change,” he said.

“Our preparation has been to have enough stuff to last January and February, and then see what happens from there.

“We have always chosen producers we know and like, and work directly with them. They’re lovely cheeses.

“Because we’re a small shop, we have been able to explain directly to customers what is going on.

“We choose to buy direct but now we’re being lumbered with the paperwork rather than if we bought through a wholesaler.”

He said he opened his first shop two years ago with a view to Brexit.

“At that time we thought the border could have been north/south rather than east/west. If that had been the case, it would have been much worse for us, because most of our stuff goes to Dublin to wholesalers.

“We thought if we have a shop we could worry less about moving. It also helped us massively through Covid,” he said.

“Christmas was insane this year – we sold online to reduce numbers in the shop but the shop was about three times as busy as it was last year.

“I think it was down to a combination of slow growth over the last two years and a big push for buying from local businesses. Then, with people staying at home for Christmas, there were more orders.

“So we’re not too bad, we’re in a good position after a really busy Christmas and good cashflow, a tight team of three people that do everything.

“We are not planning to send a lot of stuff in January; we’ll rely on stuff coming in and see how it works out.”