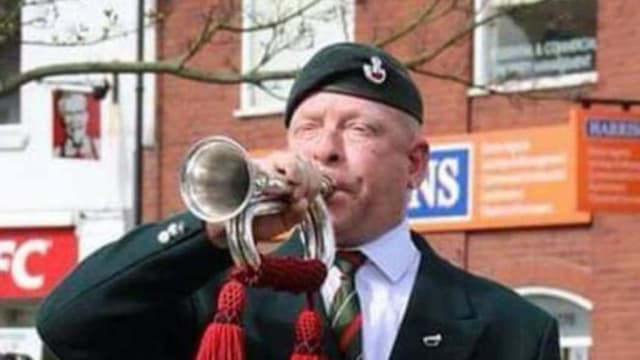 An ex-Army bugler who has played the Last Post outside his home every night but one since March in tribute to Covid-19 victims has given an emotional final performance on New Year’s Eve.

Paul Goose, 53, was joined by two fellow buglers outside his home in Cudworth, South Yorkshire, and cheered by a small group of neighbours after making a plea on social media for crowds not to gather due to coronavirus risks.

Mr Goose toasted all those who had died in 2020 after his 275th and final performance which was topped off with fireworks.

The former Light Infantry solider has raised almost £10,000 for the intensive care unit at Barnsley Hospital with his nightly 8pm renditions.

Speaking outside his semi, Mr Goose said: “Thank you to each and every one of you for your continued support, your kind comments and shares of my videos.

“I’m honoured to have such a brilliant community and such good friends.

“From the bottom of my heart, I will miss you all at 8pm and thank you.”

Mr Goose said: “I’ve got a tear in my eye already. I am going to miss it.”

“Let’s hope with the new vaccine that 2021 will be better year for us all.”

Mr Goose was joined by the two other buglers for the Last Post before a solo rendition of No More Parades.

He started playing at the start of the first lockdown after the death of a close friend and vowed to keep playing until people stopped dying of coronavirus.

But he said the rising number of cases means he will have to stop as there is no real end in sight.

He told the PA news agency earlier: “I woke up one Sunday morning in March and found out one of my old Regimental Sergeant Majors had passed away. He was a good friend.

“I wanted to play the Last Post for him that night. When I came to do it and the response I got, I decided to carry on doing it.”

Mr Goose, who works in construction, said: “I wanted to carry on until no more people are passing away from this.

“But, with this second wave carrying on, I could be doing it for four or five years so I decided to stop on New Year’s Eve.”

Mr Goose said he has played every night since March 29 except one, when he went to Cleethorpes with his fiancee and forgot to take his instrument.

And he has streamed all his performances live on his Facebook page.

He was hoping that his 275 performances would give him an official world record but this request has so far been denied, despite a local petition and his MP, Stephanie Peacock, raising it in Parliament.

– Details of Mr Goose’s fundraising can be found at https://www.justgiving.com/campaign/PaulBarnsleyBugler