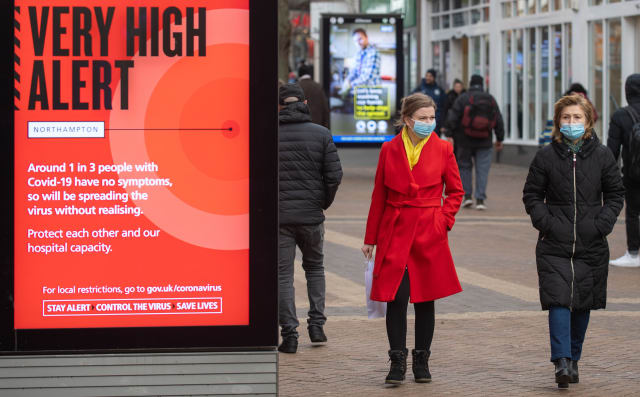 The UK must redouble its efforts to fight coronavirus, Prime Minister Boris Johnson has said, as an extra 20 million people in England were plunged into the toughest Tier 4 lockdown restrictions.

On the day a vaccine from Oxford University and AstraZeneca was approved to tackle Covid-19, Mr Johnson said a new strain of the virus was “surging across the country” and immediate action was needed.

He told a Downing Street briefing that the Oxford vaccine and one from Pfizer were being rolled out, adding: “We are working as hard and as fast as we can to get the supplies to you.”

But he said: “We have to face the fact that we’ve got two big things happening at once in our fight against Covid – one’s working for us and one’s working against us.

“On the plus side, we have got two valid vaccines, and we’re racing to get them out – and on the bad side there is a new strain of the virus which is spreading much faster and surging across the country.”

Referring to new tier allocations announced by Health Secretary Matt Hancock, Mr Johnson said: “At this critical moment, with the prospect of freedom within reach, we’ve got to redouble our efforts to contain the virus

“No-one regrets these measures more bitterly than I do, but we must take firm action now.”

It came as a further 981 people had died within 28 days of testing positive for Covid-19 as of Wednesday, bringing the UK total to 72,548.

This is the highest daily figure reported since April 24, when 1,010 deaths were reported, but there is likely to be a lag in reporting deaths over the Christmas period.

Among the areas moving to Tier 4 are the Midlands, parts of the North East and North West and parts of the South West.

An additional 20 million people will move to the tightest restrictions, making a total of 44 million in Tier 4, or 78% of the population of England.

Other secondary and college students will go back full-time on January 18.

Primary schools in a “small number of areas” where Covid-19 infection rates are the highest will not reopen for face-to-face teaching to all pupils as planned next week.