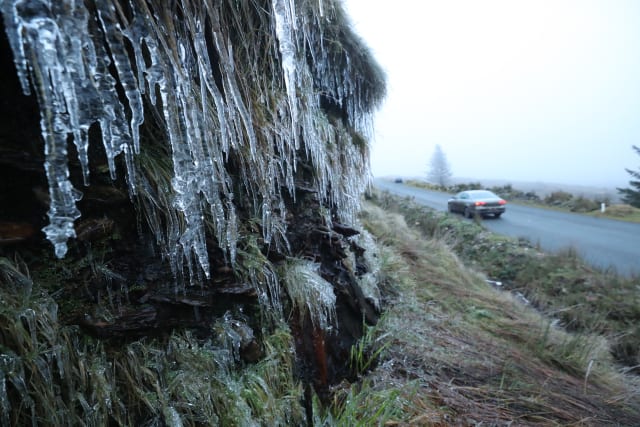 Further snow and ice warnings have been issued after the coldest night of the winter so far – with a low of -10.2C recorded in the Scottish Highlands.

The reading at Dalwhinnie was the joint coldest recorded during 2020, the Met Office said on Wednesday.

Forecasters are predicting further disruption to travel, with a warning of rapidly freezing surfaces on Wednesday evening, covering coastal areas stretching from Kent to south Devon.

As well as icy conditions along the south coast between 6pm on Wednesday and 11am on New Year’s Eve, 2-3cm of snow could fall, mainly over hills.

Other Met Office warnings are also in place in parts of Scotland, Northern Ireland, northern England and North Wales.

Met Office chief meteorologist Paul Gundersen said: “An Atlantic frontal system looks likely to bring a mixture of rain, sleet and snow to parts of southern England and South Wales on Wednesday, but the extent of any snow is very uncertain.

“There is then a risk of further snow moving south across Scotland, northern England and the Midlands on Thursday.”

Although the AA said regional restrictions imposed due to Covid-19 meant roads were quieter than normal, bitterly cold conditions are forecast to continue throughout Thursday and into the new year.