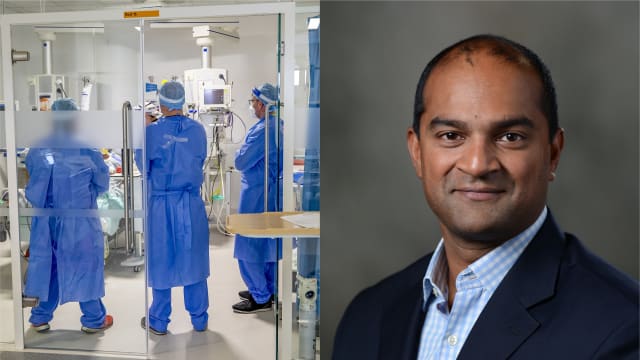 People are being urged to stay home on New Year’s Eve to prevent the “dire” situation in hospitals from getting worse.

The Intensive Care Society’s Dr Zudin Puthucheary, who also works at the Royal London Hospital, believes overworked hospital staff will have to deal with a further peak in Covid-19 admissions after households in some areas were allowed to mix on Christmas Day.

And he is concerned that could be exacerbated if people choose to celebrate the new year with friends and family.

Asked if he had a message for the public, Dr Puthucheary told the PA news agency: “Don’t celebrate New Year’s Eve with big groups of people, don’t go to the pub – this is the big thing that will help us.

“We know that you’ll end up critically ill 10 to 14 days after your Covid infection really kicks in, so if we’re going to have to deal with the Christmas peak, we don’t need a New Year’s Eve peak.

“And more importantly our patients don’t need them – they could end up with us at the peak of this.

“Stay home, celebrate at home and then there’ll be an opportunity to celebrate and see people later on.”

Data shows there are more Covid-19 patients in NHS hospitals in England now than there were at any point in the first wave.

He said a “huge number of patients” are “coming in rapidly” and numbers are rising in “every hospital”.

“These patients are sick,” he said. “They need intensive care, they need all our support, and so we don’t have the staff to look after them.

Dr Puthucheary said focusing on bed occupancy statistics can be misleading because many ICUs are expanding their capacity to cope with the numbers.

“The problem is these are just beds,” he said. “There’s no staff that comes with them.

“And while a critically-ill patient is essentially a patient who needs a bit of kit – a machine or some drugs – to keep them alive, those things don’t work without someone to make them work like an ICU nurse or an ICU doctor.

“Even worse, those things can go badly wrong very, very quickly, so if you haven’t got a highly trained person looking after them they can kill people.”

While he says hospitals have become used to coping with annual “winter pressures”, he does not know what to expect if the situation continues to worsen because “we’re well beyond any of that right now”.

“We’re in a completely uncertain land,” he said.

“That’s what keeps many of us up at night worrying – what will happen in that scenario? I don’t know the answer.

“I would like to think we could manage, but that’s because I’ve never experienced in my life not being able to manage.”

He is also worried for the mental health of ICU staff around the country.

“Without a doubt the intensive care staff in the United Kingdom are burning out at speed,” he said.

“It has been incredibly stressful for our staff.

“A lot of them are breaking down and I just don’t know how we’ll get all of them through this winter.”

For now he says he is focused on trying to “get through the next two weeks”, but he remains worried about the effect New Year’s Eve will have on the infection rate.

He added: “We also really worry that people will go out and we’ll have all the same New Year’s Eve troubles we always have – like all the traumas, all the fights and all the alcohol around – which will overload our emergency departments and overload our intensive care departments.

“Everyone in the Intensive Care Society is worried.”