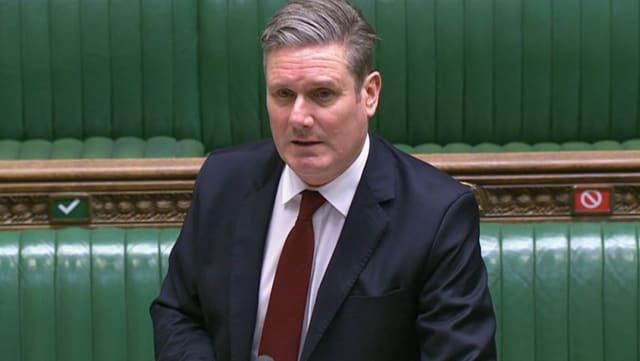 Sir Keir Starmer has claimed MPs who oppose Boris Johnson’s “thin” Brexit deal are hiding “in the knowledge that others will save you from the consequences”.

The Labour leader issued a warning about the consequences of not supporting legislation to enact the post-transition period agreement between the UK and EU, as he faces a rebellion among his MPs.

Sir Keir told the Commons that Labour would vote to implement the treaty to “put in place a floor” from which the UK can build a “strong” future relationship with the EU.

But these orders are not universally supported among his MPs, with some expected to vote against the European Union (Future Relationship) Bill at second reading.

Speaking after Prime Minister Mr Johnson had introduced the Bill, Sir Keir said a “thin deal” with “many flaws” is better than a no-deal scenario – and there is “no better deal coming in the next 24 hours”.

He added: “There’s only one choice today, which is to vote for implementing this deal or to vote for no deal.

“Those that vote no, are voting for no deal.

“This is the nub of it: those voting no today want yes. They want others to save them from their own vote. Voting no, wanting yes, that’s the truth of the situation and that’s why my party has taken a different path.”

Sir Keir said he would have negotiated a “better” deal than Mr Johnson, adding: “When the default is no deal it’s not a mark of how pro-European you are to reject implementing this treaty.

“It isn’t in the national interest to duck a question or to hide in the knowledge that others will save you from the consequences of your own vote.

“And so Labour will vote to implement this treaty today to avoid no deal and to put in place a floor from which we can build a strong future relationship with the EU.”

Sir Keir went on to warn British businesses will face “an avalanche of checks” under the deal, before criticising the SNP for hoping that others do the “right thing” and vote in favour of implementing the treaty.

Responding to the SNP’s David Linden, he told the Commons: “He’s going to vote in the hope that others will vote the other way and save him from the consequences of his own vote.

“That is the truth of the situation for the SNP, hoping that others will do the right thing and vote in favour of implementing the treaty because we fought against no-deal together for months and years.”