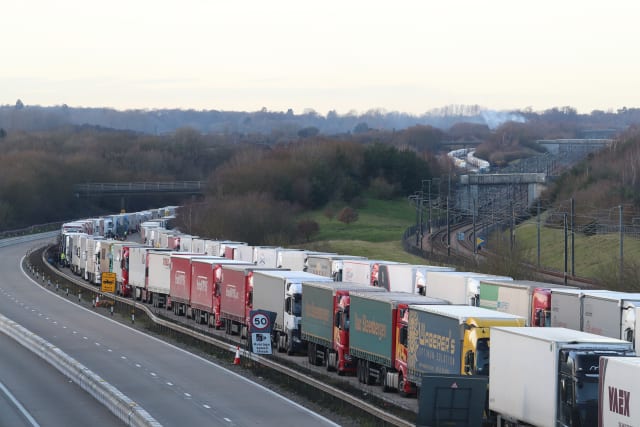 Nightmare scenarios of miles-long lorry queues in Kent following a no-deal Brexit may not come to reality following the UK-EU deal, but challenges for traders remain.

Hauliers planning to load up their HGVs with goods and take them across the Channel will have to contend with new rules from January 1.

Lorry drivers heading for the Dover port could even be fined £300 if they fail to follow the right protocols, the Government has warned.

So what is the process for lorries leaving the UK through Kent – via Dover or the Eurotunnel – from January 1?

From Friday, HGV drivers must ensure they have a Kent Access Permit (KAP) before entering the county on their way to the border.

This applies to all vehicles over 7.5 tonnes, whether they are carrying goods or not, the Government says.

The permit is intended to help manage traffic by confirming drivers have the right documents for EU import controls.

Each KAP only lasts for 24 hours and drivers will need a new permit each time their HGV leaves Great Britain.

Drivers are told to use the Government’s ‘check an HGV is ready to cross the border‘ service to prove their HGV has the right EU import and commodities documents for the goods it’s carrying before it crosses the border.

Once lorries are ready to enter Kent they will then have to contend with the array of traffic management plans designed to ease pressure on the road network.

Decisions on the different routes and holding areas for lorries – organised under Operation Stack and Operation Brock – are taken by Kent Police.

These include “lorry parks” off the M20 in Ashford and at Manston Airport.

Drivers may also be asked to attend an “inland border facility” for extra customs checks when obtaining their KAP.

For accompanied freight travelling from England to France, the HGV driver must have the result of a negative Covid-19 test taken less than 72 hours earlier.

Drivers heading to the port of Dover should get their test at Manston Airport before travelling on to Dover.

Meanwhile those headed for the Eurotunnel should go via the M20, where testing is at Junction 8.

Tests take 40 minutes to get a result and those with negative results will be directed to their departure point.

Those with positive results will receive further information and support will be available, the Government says.