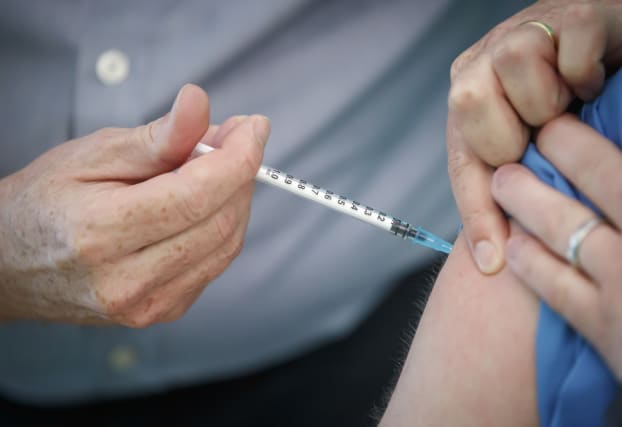 More at-risk people need to be vaccinated faster, experts have said, as they agreed to a new dosing regimen which will see a speedier rollout of the coronavirus vaccines.

The group of experts, which advise the Government on vaccination, said that the focus should be on giving at-risk people the first dose of whichever vaccine they receive, rather than providing the required two doses in as short a time as possible.

The Joint Committee on Vaccination and Immunisation (JCVI) said that everyone who receives the Pfizer/BioNTech and Oxford University/AstraZeneca vaccines will still receive their second dose and this will be within 12 weeks of the first.

This means that the vaccines can be deployed in a way that reaches as many people as possible as quickly as possible – with the emphasis on targeting the vulnerable groups first.

Some scientists have welcomed the decision, saying it will allow greater “flexibility” in the vaccination programme.

But pharmaceutical giant Pfizer said that it only assessed its vaccine on a two-dose regimen whereby people were given the jab three weeks apart.

In a statement it said: “Pfizer and BioNTech’s phase three study for the Covid-19 vaccine was designed to evaluate the vaccine’s safety and efficacy following a two-dose schedule, separated by 21 days.

“The safety and efficacy of the vaccine has not been evaluated on different dosing schedules as the majority of trial participants received the second dose within the window specified in the study design.

“Data from the phase three study demonstrated that, although partial protection from the vaccine appears to begin as early as 12 days after the first dose, two doses of the vaccine are required to provide the maximum protection against the disease, a vaccine efficacy of 95%.

“There are no data to demonstrate that protection after the first dose is sustained after 21 days.

“While decisions on alternative dosing regimens reside with health authorities, Pfizer believes it is critical that health authorities conduct surveillance efforts on any alternative schedules implemented and to ensure each recipient is afforded the maximum possible protection, which means immunisation with two doses of the vaccine.”

Commenting on the decision, Stephen Evans, professor of pharmacoepidemiology at the London School of Hygiene & Tropical Medicine, said: “The decision to allow both the currently UK authorised vaccines to be given with a greater delay between doses to maximise the numbers getting one dose as rapidly as possible is a sensible one.

“It cannot have been an easy decision, since the evidence on the efficacy of one dose was more limited, but the crisis in the UK requires more than the usual regulatory approach.”

Prof Robert Read, head of clinical and experimental sciences within medicine at the University of Southampton, added: “JCVI has advised that whilst we should be prepared to give people the second dose, it is acceptable to give that within 12 weeks of the first dose. This allows some much-needed flexibility in a programme as big as this.”

Ian Jones, professor of virology at the University of Reading, added: “A level of immunity sufficient to prevent severe disease can be generated after only one inoculation of this vaccine so the revised JCVI advice to prioritise giving those at risk their first dose is a sensible idea.

“It will allow more people in this group to be treated with initial supplies, reduce the threat of hospitalisation from Covid-19, and accelerate the return to normality.”

Lawrence Young, professor of molecular oncology at Warwick Medical School, said: “To maximise the number of at-risk groups receiving the vaccine, the first dose will be given to as many people as possible with the second dose being delayed for up to 12 weeks. This will allow the 100 million vaccine doses ordered by the UK Government to be rolled out to as many people as possible starting as soon as next week.”