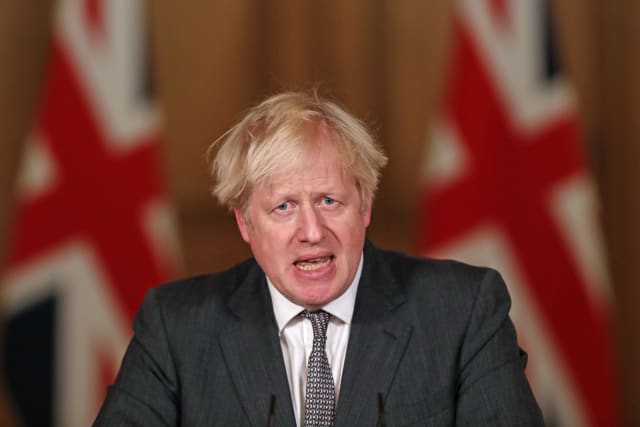 More than three quarters of England’s population is being ordered to stay at home to stop the spread of coronavirus as swathes of the country were plunged into Tier 4 restrictions overnight.

Another 22 million people in parts of the North East, North West, South West and Midlands were placed under lockdown measures at 00.01 on Thursday in a bid to control infections.

It means a total of 44 million people, or 78% of the population of England, are now in Tier 4, where non-essential shops, as well as gyms, cinemas, casinos and hairdressers, have to stay shut.

People are also limited to meeting one other person from another household in an outdoor public space, and must not leave their Tier 4 area except for legally permitted reasons such as medical appointments.

Prime Minister Boris Johnson said the UK must redouble its efforts to fight coronavirus, and that “no-one regrets these measures more bitterly than I do” but insisted that “firm” action was needed to control the pandemic.

The reopening of secondary schools in England will be delayed, and in some of the areas hardest hit by Covid-19 primary school pupils will also not return to their desks as planned next week.

Education Secretary Gavin Williamson said students in exam years will return to secondary schools a week later than intended, from January 11, while other secondary and college students will go back full-time on January 18.

Primary schools in 50 areas within London, Essex, Kent, East Sussex, Buckinghamshire, and Hertfordshire will not reopen for face-to-face teaching to all pupils as planned next week.

However, children of key workers and vulnerable youngsters will still be able to attend lessons in primary and secondary schools.

Universities are being asked to reduce the number of students returning to campus from the beginning of next month, and those that do return should be offered two rapid coronavirus tests.

It came as another 981 people died within 28 days of testing positive for Covid-19 as of Wednesday, the highest daily figure reported since April 24, though there is likely to be a lag in reporting deaths over the Christmas period.

And a further 50,023 lab-confirmed cases of coronavirus in the UK were recorded as of 9am on Wednesday.

The British Medical Association (BMA) warned that the NHS will “struggle to get patients in urgent need of care, the care they need” if the trajectory of rising infections continues.

Council chairman Dr Chaand Nagpaul said: “With daily cases soaring to over 50,000 this week, placing the NHS under enormous strain, the decision to move millions more people into tougher restrictions across the country is a necessary step.

“As we hear more reports of hospitals declaring major incidents, ICU beds reaching 100% capacity in parts of the country, and patients having to be transferred to other hospitals for care, it is vital that everything possible is done to bring down the spread of the virus.”

The Prime Minister told a Downing Street press conference on Wednesday evening that the new strain of coronavirus was “spreading much faster and surging across the country” and that immediate action was needed.

But he said the Government was “working as hard and as fast as we can” to get supplies of the newly-approved vaccine from Oxford University and AstraZeneca to people.

The Medicines and Healthcare products Regulatory Agency (MHRA) gave the jab the green light on Wednesday morning and 530,000 of doses are expected to be available for rollout from Monday.

The UK has ordered 100 million doses of the Oxford University vaccine, enough to vaccinate 50 million people.

The plan is to vaccinate all vulnerable groups first, with all adults eventually offered the jab.

All parts of the UK will receive the jab from Monday, with devolved administrations in Wales and Scotland saying they were ready to receive their allocation.

Labour has called for a target of two million vaccinations a week initially, before that is increased further in the hope that restrictions can be eased before Easter.

Meanwhile, people planning to celebrate New Year’s Eve were warned they must leave the parties for later next year as “Covid loves a crowd”.

Professor Stephen Powis, NHS England’s national medical director, said staying at home and seeing in 2021 “within the rules” will reduce infections and relieve pressure on hospitals.

He told the Downing Street briefing: “We can all play a part in fighting this terrible virus: stay at home, mark the New Year with just nearest and dearest within the rules.

“This action will reduce infections, relieve pressures on hospitals, and that’s how everybody can help to save a life.

“Covid loves a crowd, so please leave the parties for later in the year.”