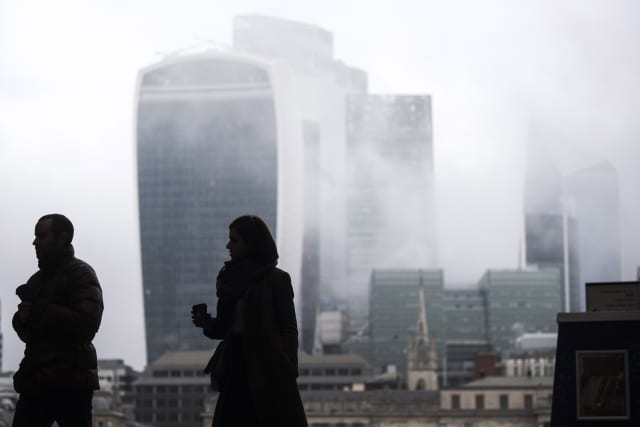 The London markets wobbled into the red as virus concerns overtook initial optimism following the approval of the AstraZeneca and University of Oxford vaccine in the UK and the passing of the Brexit Bill in Parliament.

Stocks receded after the FTSE 100 had stormed to a new nine-month high on Tuesday after confirmation of the UK’s deal to exit the EU.

Sentiment slumped in the afternoon after the Government announced plans to place more areas of the UK into severe Tier 4 restrictions, weighing down on retail stocks.

Joshua Mahony, IG senior market analyst, said: “UK stocks are on the back foot despite the passing of the Brexit Bill, putting to bed fears of a no-deal Brexit when the UK leaves the EU on Thursday night.

“Unfortunately, it appears to be the case of a buy-the-rumour, sell-the-fact scenario.

“With a record 53,000 new cases yesterday, the UK remains on a sharp upward trajectory with no sign of turning the corner.

“The fear is that without a swift reversal in cases, there is a strong chance that the Government either lengthens or tightens restrictions further.”

Elsewhere in Europe, the other major markets also closed in the red amid the broad downturn in sentiment.

In the US, the three major indices all rallied due to impending stimulus and optimism driven by the ongoing rollout of coronavirus vaccines, as the US dollar slid to a two-year low.

Meanwhile, sterling soared higher on the back of weakness in the US greenback.

Non-essential retailers such as Dunelm and Next dropped in value after changes to regional tiers across the country forced stores to shut their doors to customers.

In company news, shares in AstraZeneca closed lower despite UK regulators finally granting approval for its vaccine to be used.

The Government said the Medicines and Healthcare products Regulatory Agency (MHRA) had given the jab the green light, with 530,000 doses available for rollout from Monday. Shares in AstraZeneca closed 61p lower at 7,401p.

Elsewhere, Paddy Power owner Flutter increased in value after it completed its 4.2 billion dollar (£3.1 billion) deal to increase its stake in US fantasy sports firm FanDuel to 95%. Shares moved 25p higher to 15,300p.

It closed 33p higher at 303p as it confirmed “a further announcement on a return of cash to shareholders” will be made in due course.

The price of oil was broadly flat on Wednesday, nudging just 0.04% higher to 51.19 dollars per barrel of Brent crude.